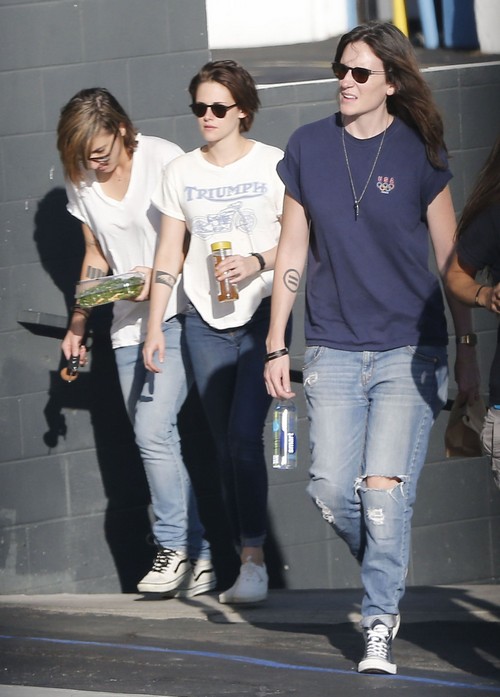 Is Kristen Stewart dating or not dating Alicia Cargile? That seems to be a matter of debate, at least for the likes of many tabloid magazines. However, the culprit of this week’s rumors is the outlet X17 Online, which is usually responsible for uploading various paparazzi pictures. The site uploaded several photos of Kristen and Alicia carrying coffees, but then added a caption surmising that the two were dating.

Um, based on them carrying coffee and walking together? Now, Alicia has been linked to Kristen many, many, MANY times – too many to count. Every time Kristen cuts her hair, the rumors start to crop up again – apparently because the rumor mill can’t handle the thought of Kristen having short hair and dating guys.

It’s also clear that these rumors have gained a lot of attention this week because of Robert Pattinson‘s new girlfriend. Could Kristen’s pap photos with Alicia be her unofficial response to Rob’s new relationship with FKA Twigs a.k.a. Tahliah Barnett? I don’t think it’s her coming out as a lesbian, but maybe it’s her way of telling the world that she’s fine and that she’s moved on. Or maybe she just doesn’t give a damn, which seems much more in line with the Kristen Stewart we know.

It’s been a long time since Kristen and Rob have broken up, and honestly, the only person that she’s steadily been linked to is Alicia Cargile. I wouldn’t be surprised if the two did begin dating, but even if they don’t, you would think that Kristen would have moved on by now, right? Either she’s doing a spectacular job of keeping her romances secret – something Rob clearly hasn’t managed – or she’s still pining for Rob. You guys decide.