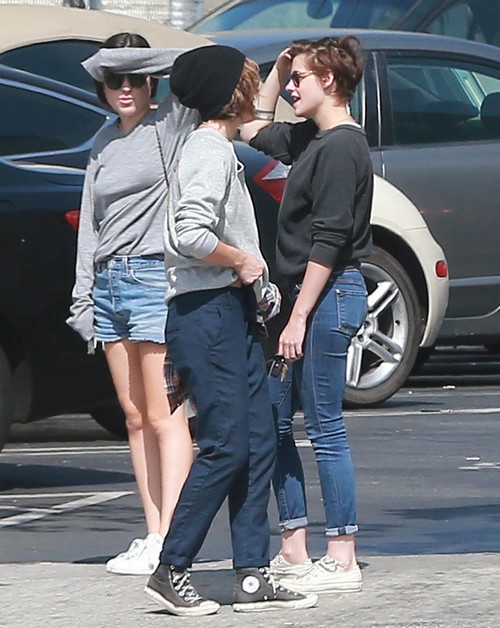 There are so many conspiracy theories surrounding Kristen Stewart’s love life right now, or lack thereof. See, Kristen hasn’t ‘officially’ dated anyone since breaking up with Robert Pattinson, which has immediately led to people screaming ‘Lesbian!’. Kristen is often spotted having lunch with her friend and assistant Alicia Cargile, who the tabloids have also turned into her rumored love interest because that sells stories. But then, there are also the whispers of Kristen Stewart dating Nicholas Hoult, and that rumor has much more evidence to support it.

Either way, Kristen’s refusal to take an official rebound girlfriend OR boyfriend in the wake of the Robert Pattinson/FKA Twigs relationship has caused havoc in the media, because they don’t know how to react to it. Everyone’s just jumping on the Kristen Stewart is a lesbian bandwagon right now, only because it seems convenient. Oh, Kristen hasn’t been spotted with a guy in some time? No problem, let’s link to her the one person that she is spotted with all the time, never mind that Alicia Cargile is also her assistant and it’s on her JOB description that she’s always with Kristen.

Now, Kristen Stewart dating Nicholas Hoult is much, much more likely, especially since we already know that scrawny Brits are Kristen’s type. Plus, Nicholas has taken great pains to support Kristen at all of her professional events recently, and not only that, but he’s made sure that the paparazzi and photographers don’t see him. Either he’s a very, very supportive friend, or there’s something else going on between the two.

What do you guys think? Is Kristen Stewart dating Alicia Cargile [lol] or is she dating Nicholas Hoult? Could KStew be in a love triangle with BOTH Alicia Cargile and Nicholas? Or is she single, and just chilling? Let us know your thoughts in the comments below.

Actress Kristen Stewart is seen enjoying lunch with her rumored love interest and assistant Alicia Cargile in Los Feliz, California on October 12, 2014. Kristen, who carried Alicia’s shirt after watching her take it off, is also rumored to be dating her ‘Equals’ co-star Nicholas Hoult. Kristen and Nicholas were recently spotted cozying up at a Cinema Society bash for Stewart’s new film ‘Clouds of Sils Maria,’ in NYC. FameFlynet