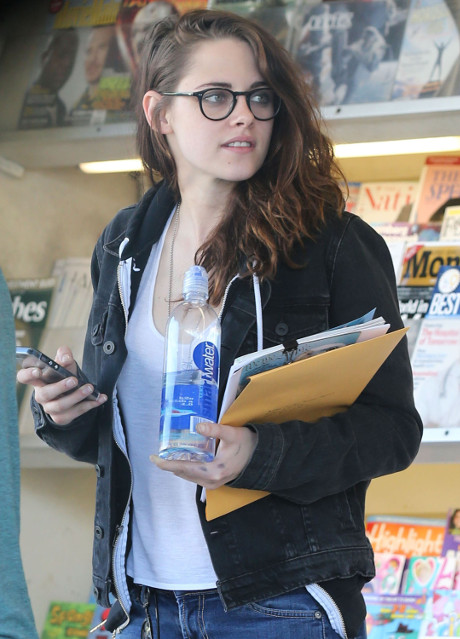 Kristen Stewart will be starring alongside Nicholas Hoult in a new sci-fi love story called Equals. K-Stew has agreed to play the role and, after signing the deal, admits that she’s completely terrified of the project. “I can’t believe I agreed to do it… I’m terrified of it,” she says. But why is she so afraid of the film? In a recent interview, Kristen describes this “love story of epic, epic, epic proportions” as a modern version of 1984. She reveals, “Though it’s a movie with a really basic concept, it’s overtly ambitious.”

Drake Doremus, director of the film, says that Kristen and Nicholas will have great chemistry together. But that’s not the most interesting part of this whole situation . . . . Jennifer Lawrence was also offered Kristen’s role; however, she ultimately turned it down. I wonder how Kristen feels about being second choice?

While she admits that she thinks the film is “overtly ambitious,” we think Kristen might be terrified of coming between Nicholas Hoult and his girlfriend, Jennifer Lawrence, the young actress who doesn’t take guff from anyone. If you watched the 2014 Golden Globe Awards then you probably saw the kiss J-Law gave Nicholas after she won her prize. They suffered a bit of a rough patch for a brief moment, but now things appear to be back on, and what if Kristen Stewart is terrified of *potentially* breaking up another relationship? Could Jennifer even be a bit worried about Nick working with the trampire?

It’s no secret she tends to be very dedicated to her roles. She better establish some boundaries for this film or Katniss Everdeen just might hunt her down and teach her a Hunger Games-style lesson!