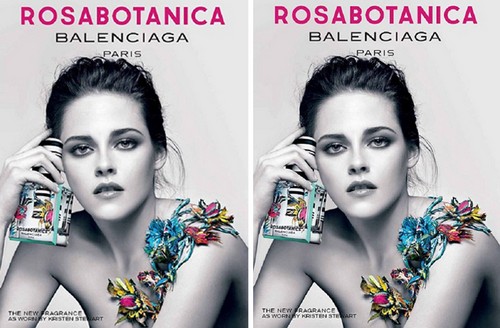 Compared to the unsightly first campaign shoot by Steven Meisel for Balenciaga’s other fragrance Florabotanica 2012 in which she looks like Snow White on a bad hair day, the new black and white close-up is a massive improvement.

Also the decision of letting her go topless as opposed to wearing yet another lampshade–ish dress like that incredibly hideous one from their 2008 spring collection seems like a good one.

Fishwrapper wraps it up nicely – despite being photoshopped to oblivion this girl actually IS beautiful.

It doesn’t matter that she’s not the most talented of all young actresses out there – we all vividly remember her abysmal acting in the “Twilight”- trilogy – nor how hard she tries to look like a permanently ill-tempered spoiled brat. There’s something about this girl.

Balenciaga’s bookers aren’t the only ones who see SOMETHING in her. The young actress made herself a household name as an A-class home wrecker thanks to her affair with director Rupert Sanders back in 2012. His gorgeous wife of 11 years Liberty Ross subsequently filed for divorce. Way to make a name for yourself girl!

But what will on-again off-again love interest Robert Pattinson say about the undeniably saucy shoot?. The beau has been shooting some adverts himself – modeling for dior homme. Quite sexy ones actually, in which he is getting pretty close to beautiful model Camille Rowe. Just In case you haven’t seen it yet, check it out below.

What do you guys think? Is the heartthrob flying back into the arms of grumpy cat Kristen Stewart, or is he finally over it? How do you guys like her new campaign shoot?