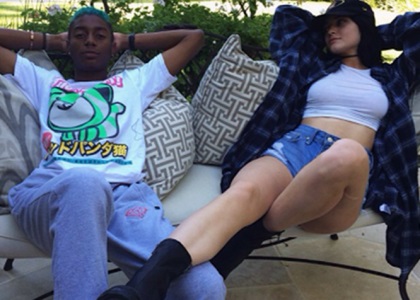 Is Kylie Jenner dating a new mystery man? Perhaps. Kylie posted a pic of herself and an unidentified boy. She captioned the pic  “Best friend, man,” which is totally cool, but people started getting suspicious after she deleted the post. Celebrities are constantly doing this sort of thing — posting something for all to see, realizing that maybe they shouldn’t have, and then removing it from the cyber realms — with little to no explanation. Why do you think Kylie got rid of the pic? Is she trying to love her new boyfriend in peace, away from the media’s eyes?

Who knows? Though, while Kylie’s caption suggests they’re just friends, it’s hard to look past the coziness of the two. Lounging in a plaid button up shit and jean shorts, Kylie drapes her legs over her friend, who’s also rocking an extremely chillaxed attitude.

Perhaps Kylie removed the photo to avoid people linking her to a guy. Unfortunately, a hasty pic delete suggests she’s trying to hide something, so it might’ve done her more good just to leave the thing posted. It’s clear there was a third person (acting as the photog) in attendance, so more likely than not she was just hanging out with some of her besties.

What do you make of this picture? Do you think Kylie and this mystery fella are dating? Leave your thoughts in the comments section below!