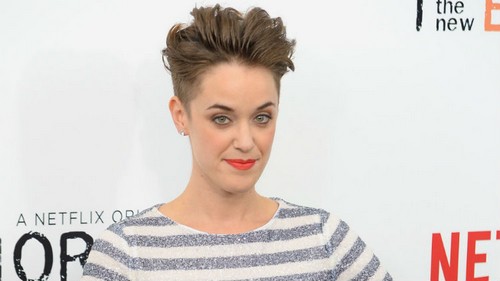 Lauren Morelli, one of the head writers for ‘Orange is the New Black‘ has filed for divorce after realizing that she’s a lesbian…. She finally realized she is gay but usually people can tell earlier on in life what gender they are attracted to, but it took her a little while longer to realize she’s gay. Thirty-one years to be exact.

Lauren Morelli filed for divorce from her husband of 2 years, Steve Basilone. They were married 6 years and it’s a joint petition…. Hopefully Steve will be alright!

Morelli started writing for Orange is the New Black 5 months after she got married to Basilone. Lauren says when she started writing for the main character who has once been in a lesbian relationship she saw herself in the character and began to feel like a fraud. She was married to a man, but clearly gay. How could she not realize this during the 6 years they were in a relationship?

Lauren came out publicly in May on Mic.com writing that as she wrote scenes where Piper – played by Taylor Schilling – falls in love again with her college girlfriend Alex played by Laura Prepon she started to use the storyline to explore her own feelings and intimately realized she was gay.

“I realized I was gay in fall 2012, one of my first days on the set. I went through it all on set: I fell in love with a woman, and I watched my life play out on screen. And now, as we are gearing up for the release of Season 2, it feels liberating and appropriate to live my life in front of you.”

She also says as she began writing about Piper’s blooming relationship with Alex, “I found a mouthpiece for my own desires and a glimmer of what my future could look like.”

Lauren is currently dating Samira Wiley who plays Poussey on the show. The couple have been dating since the beginning of this year and came out publicly as a couple at this years Emmy Awards.

According to the divorce documents, it’s all very friendly. She gets her Lexus, her apartment and her sapphire engagement ring, her husband gets the Mazda hatchback.