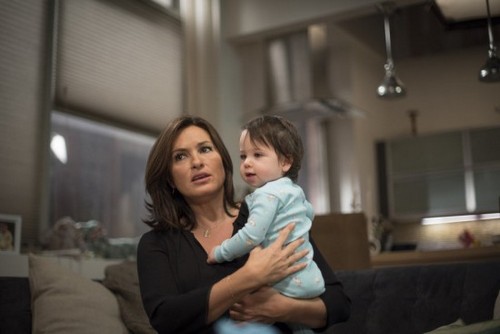 Tonight on NBC Emmy Award-winning producer Dick Wolf’s crime drama, Law & Order: SVU continues with an all new Wednesday November 19, season 16 episode 8 called, “Spousal Privilege.” On tonight’s episode, a domestic-violence dispute involving a sportscaster and his girlfriend is uncovered on security-camera footage from a parking garage, but the girlfriend is reluctant to seek legal help because she doesn’t want her family to break apart.

On the last episode, THE CHICAGO P.D. JOINED FORCES WITH MANHATTAN SVU TO UNCOVER THE ROOTS OF A CHILD PORNOGRAPHY SITE. GUEST STARRING “CHICAGO P.D.” STARS JASON BEGHE, SOPHIA BUSH AND JESSE LEE SOFFER Sergeant Hank Voight (Beghe) and Detectives Erin Lindsay (Bush) and Jay Halstead (Soffer) tracked a child pornography victim to his last-known whereabouts in New York City, where Sergeant Benson (Mariska Hargitay) and the SVU squad got a new lead – evidence of a livestreamed pornography “club” that catered to its subscriber’s shocking requests. When Lindsay discovered someone from her past was involved, she hoped it would help lead them to the site’s ringleader, but tensions between Voight and Benson threatened the case. Also starring Ice-T (Detective Odafin Tutuola), Danny Pino (Detective Nick Amaro) and Kelli Giddish (Detective Amanda Rollins). Did you watch the last episode? If you missed it, we have a full and detailed recap right here for you.

Tonight’s season 16 episode 8 looks like it is going to be great and you won’t want to miss it, so be sure to tune in for our live coverage of NBC’s Law & Order: SVU at 9:00 PM EST!

Tonight’s episode of Law & Order SVU begins with Nick on the phone fighting with his family, he hangs up and punches the locker while everyone watches.  Rollins tries to comfort him and he tells her not to “tell him what to do.”  Olivia comes in and wants to know what happened to his hand – Nick dodges her question.

Tutuola finds a video on a celebrity gossip site of famous athlete AJ Martin fighting with his baby-mam Paula in a stair well.  The surveillance video cuts out and then they see AJ dragging Paula to his car passed out.  A police officer stops him as he is putting Paula in to the car.  Olivia announces that they are going to investigate it and tells her team to track down the police officer in the video and see if charges were pressed before it becomes news.

Rollins and Nick head down to the NYC precinct, they learn that Paula refused medical treatment and they interviewed her and AJ Martin and no charges were filed.  The seargent tells them that if they have a problem they can take it up with the DA Danielle DiCarlo.  They learn that if AJ does community service it will all be dropped in six months.  They learn that AJ’s lawyer turned down the deal – and the case will probably go away.  If

Olivia can find video of what happened in the stairwell when Paula was knocked out or get Paula to talk – then they can still press charges against him.
Olivia heads to AJ Martin’s house to meet with him and his wife.  While they are there AJ screams at their son.  Totuolo sits down with AJ, who claims he had too much to drink and he and Paula had some words because sometimes Paula goes “off the rails” when she is drunk.  Olivia corners Paula and asks her what happened, Paula starts to tell her that she was drunk and tripped and fell but AJ interrupts and says that if they have anything to say they can speak in front of him.

Olivia gets a tip and turns on the TV and a video has been leaked on the news of what happened in the actual stairwell.  AJ Martin can be seen clearly punching Paula in the face and knocking her out cold.  They bring AJ and Paula in for questioning, AJ complains that he was drunk and wasn’t thinking clearly.  Paula explains that she was stumbling and acting out and AJ had to stop her, so he knocked her out.  AJ’s lawyer argues that he was just defending himself.  Olivia is pushing for AJ to go to jail, but his lawyer argues that it’s overkill – so they are heading to court.
In court AJ pleads not guilty to the assault charges, the judge sets bail at $20,000 and insists that AJ isn’t a flight risk.  Olivia corners Paula in the bathroom at court, and Paula is not happy with her, she thinks she is ruining their lives.  Paula can’t look Olivia in the eye and tell her that this has only happened once though, Olivia warns her that it is going to happen again.

After court AJ and Paula speak to the press with their reverend.  Paula announces that she is not going to play the victim, and she takes full responsibility for provoking AJ the night that he hit her.  After court they do another interview and announce that AJ proposed to her and they are getting married later that day.  Paula flashes a 15 karat engagement ring.
At court the next day the DA argues that AJ’s punch could have caused serious injury to her, and she is lucky it didn’t kill her.  AJ’s lawyer points out that Paula is fine now, and just a few minutes after Paula was knocked out – she was carrying on a conversation with the police officers.  Olivia takes the stand and points out that Paula is a typical victim of domestic violence, and the reason she is standing by him is probably because she is scared of AJ or is financially dependent of him.  AJ’s lawyer points out that AJ is taking anger management, and Nick took anger management and Olivia let him come back to work.
Rollins and Nick go out for drinks after work.  She is worried about him after AJ’s lawyer called him out in court.  Rollins is pretty drunk and says that she thinks they are over-stepping their boundaries and if Paula doesn’t want to press charges they should drop it. Rollins starts egging Nick on and trying to get him to react, he yells at her that she is jealous of his ex-wife Maria and she accuses him of losing his temper on Maria.  Nick pushes her away from him and says he is doing what AJ Martin should have done and “walking away.”

In court the next day their reverend takes that stand and argues that AJ and Paula both grew up in abusive homes and they are working on finding positive ways to communicate.  AJ takes the stand and argues that he had no intention of hurting his wife and he didn’t take her to the hospital or call 911 because she woke up and he didn’t think it was that bad.  Paula announces that she wants to take the stand to defend AJ.

Paula insists that she was drunk and jealous that night and she is actually the person that went after him.  She claims she isn’t afraid of AJ and that he is a “gentle and good man.”  During cross examination Paula admits that AJ raises his voice at their son.  She breaks down and cries that she doesn’t want to lose her family and asks the lawyer to just leave them be.

After the closing arguments the jury leaves to come to a decision.  Back at the police station Olivia and Amanda argue over whether AJ has learned his lesson or should be acquitted.  They head back to court and the jury finds AJ guilty of wreckless endangerment, he’ll get a minimum of two years.  After court Paula screams at Olivia that it was her choice to stay with AJ and Olivia took that away from her.