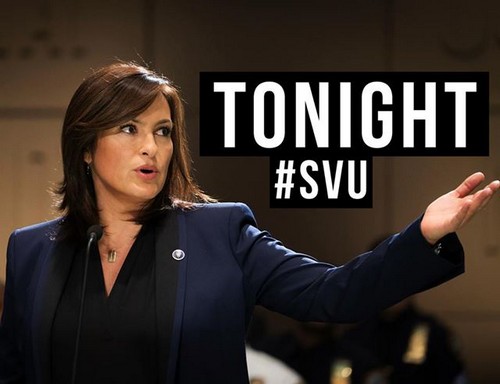 Tonight on NBC Emmy Award-winning producer Dick Wolf’s crime drama, Law & Order: SVU continues with an all new Wednesday December 10, season 16 episode 9 called, “Pattern Seventeen.” On tonight’s episode, a serial rapist strikes, attacking young, petite girls during the early morning. Rollins finds a pattern between these assaults and some rape cases she worked on back in Atlanta, but the rape kits for those were never tested. Meanwhile, a judge threatens to remove Noah from Benson’s [Mariska Hargitay] home.

On the last episode, Detective Tutuola (Ice-T) came across leaked security footage of a violent domestic dispute in a parking garage, showing sportscaster A.J. Martin (guest star Chad Coleman) hit his girlfriend Paula (guest star Meagan Good). While Fin and Benson (Hargitay) investigated the couple’s lifestyle and history, Paula pushed back to keep her relationship and family intact. Benson turned to ADA Barba (R. Esparza) for help to convince Paula that her world doesn’t have to revolve around A.J. Meanwhile, the case had an interesting effect on Rollins (Kelli Giddish) and Amaro’s (Danny Pino) relationship. Also guest starring Elizabeth Marvel (Counselor Rita Calhoun), Jefferson Mays (M.E. Rudnick), Leslie Odom Jr. (Reverend Curtis Scott), David Dinkins (Judge Chet Baker) and Hoda Kotb (as herself). Did you watch the last episode? If you missed it, we have a full and detailed recap right here for you.

Tonight’s season 16 episode 9 looks like it is going to be great and you won’t want to miss it, so be sure to tune in for our live coverage of NBC’s Law & Order: SVU at 9:00 PM EST!

Tonight’s episode of Law & Order SVU begins with a young woman named Annie walking down an alley – she is reenacting the night that she was attacked for Olivia and Fin.  She stops and says she doesn’t remember much more, but she says that he was wearing thin rubber gloves like a doctor and he hummed church music under his breath.  The last thing he said before he left was “nice to see you again maybe we can do tea sometime.”

Olivia decides to have some people comb the alley and look for the rubber gloves to see if he ditched them.  Fin warns her that the odds of him slipping up and doing that are slim to none because he is clearly a professional.  Olivia agrees, and says he is going to keep raping again and again until they find him.

They find a rubber glove in the sewer grate, but there is no DNA or evidence on them.  Rollins shows up late to work and they fill her in on the rapist, when she hears that he hummed she reveals that she worked on a humming serial rapist back in 2008 in Atlanta and they never caught him.  Olivia gets another call about another rape and she and Fin head to the school to question the teen girl.  The girl doesn’t remember much, she says that the guy grabbed her by the back of the neck and she passed out – she says that he was wearing doctor gloves and he was humming church music.

Rollins gets a phone call from Atlanta and her old boss confirms that there are three open rape cases down South with the same MO.  Olivia tells Rollins to go down to Atlanta and look for the rape kits that were done on the victims and take Fin with her.  Meanwhile, Noah’s legal rep visits Olivia to let her know that there is going to be a hearing for Noah’s alleged abuse.

Rollins and Fin arrive in Atlanta – and a cop leads them to a warehouse that is stacked wall to ceiling with boxes of evidence.  They have no idea where they stored the rape kits from 2008, and if Rollins wants them she and Fin are going to have to find them themselves – they get to work.

Rollins old boss Chief Patton arrives and says that he has the rape kits that Amanda was looking for.  He doesn’t understand why she didn’t come to his office and let him know she was here – Rollins clearly didn’t want to see him.  Patton gives them the files and tells her to “feel free to reopen them” he would love to solve three rape cases on New York’s dime.

Rollins and Fin head to a woman named Ashley Miller’s house, she won’t let them in because her husband has no idea that she was raped.  They explain to her on the doorstep that there were more rapes in New York.  She remembers the hymn that he sang to her while he was raping her, and sings the song to them.  Rollins leaves her statement with her and tells Ashley that if she remembers anything else to call her.  Ashley reveals that the rapist had a pager and it went off before he left her and says that “other people need him.”

Rollins and Fin head back to NYC where they are calling him the Patter 17 Rapist – they get the DNA from Atlanta’s cases and confirms that it is the same guy.  However – his DNA isn’t in the system so they have no way of id’ing him.

They get another call of another rape and rush to the hospital, 12 year old Ryan was out walking her dog when someone grabbed her and started raping her – but her dog saved her and but the rapist.  They head to Ryan’s hospital room and she confirms that the man was wearing gloves, humming, and pulled her in to a car.  Ryan says that she shoved her headphones in to the seat of his car so that she could prove he was there.  Ryan says that the car was black and had Connecticut plates – she gives them half the plate number.

They find a man named Joseph with a black sedan with Connecticut plates and learn that he is a doctor, and he is under investigation for selling pills.  They head to the parking garage at the hospital and search Joseph’s car – they find a trunk full of Oxycontin and Ryan’s headphones are in the back seat.  They bring Joseph in and none of the girls can ID him, he swears he has never been to Atlanta and he has never seen Ryan.

They send his DNA out and realize that Joseph isn’t the rapist, he may be innocent but Ryan was definitely in his car.  Olivia tells them to push him until he caves and gives them a name.  Whoever he was letting use his car – was using it to rape girls.  Fin heads to the parking garage to see if it is possible that someone else took Joseph’s car.  The attendant says the only people who have access to the keys are the EMT’s, sometimes they grab the doctors keys to move their cars in case they are blocking the ambulances.  Fin tells the attendant he needs a list of all of the EMT’s that accessed the keys.  They pull the security footage from the parking garage and see an EMT named Albert Beck taking Joseph’s car.

Rollins head to Joseph’s last known address  and learn that his girlfriend Beth kicked him out because he has been sleeping with her fifteen year old daughter for the last four years.  The teen girl says that Albert wasn’t guilty – he’s being set up, and after some threatening she finally agrees to set up a meeting with Albert so that they can pick them up.

That night they all head to the park undercover and pick Albert up when he is looking for Beth’s daughter.  After a short chase they run him down, and cuff him, and bring him in.  They reveal to Albert that they have him on child pornography, and rapes all over the country, and his DNA.

The next morning Olivia pays Judge Linden a visit so they can discuss Noah’s care – Olivia ignores Chief Dodd’s phone calls and says that she will do whatever she needs to do to prove that she is a good parent for Noah.  Afterwards Olivia rushes to the bureau and reveals that their rapist confessed to four rapes in NY and 28 more in other states.  She and Dodds explain that all of the New York assaults could have been prevented if there wasn’t such a rape kit back log and half of the police stations never even test them for DNA.