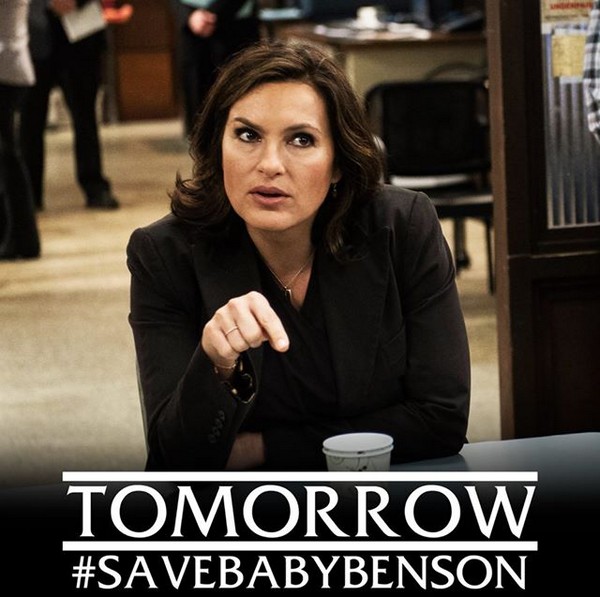 Tonight on NBC Emmy Award-winning producer Dick Wolf’s crime drama, Law & Order: SVU premieres with an all Wednesday September 24, season 16 episode 1 called, “Girls Disappeared.” On tonight’s episode, in the 16th-season opener, Benson adjusts to being a foster mom to baby Noah, whose life is in jeopardy after Amaro does some undercover work linked to Noah’s deceased biological mother. Meanwhile, a new addition to the squad has a rough start.

For those of you who aren’t familiar with the show, Law & Order: Special Victims Unit is an American police procedural, legal, crime drama television series set in New York City, where it is also primarily produced. In the style of the original Law & Order, episodes are often “ripped from the headlines” or loosely based on real crimes that have received media attention. Created and produced by Dick Wolf’.

Tonight’s season 16 premiere episode looks like it is going to be great and you won’t want to miss it, so be sure to tune in for our live coverage of NBC’s Law & Order: SVU at 9:00 PM EST! While you wait for our recap hit the comments and let us know how excited you are about the new season?

Tonight’s episode of Law & Order SVU begins with Olivia putting baby Noah to bed. She comforts him while she tries to put him to sleep and tells him that she knows he misses his mommy, but she had a hard road and she doesn’t know if she will ever be able to tell him the story. Olivia reassures him that his mom Ellie loved him very much.

Four months earlier, Noah’s mom Ellie was set to testify against a criminal in a grand jury. Olivia reassures her that once she testifies she can get Noah back from foster care. Ellie reveals that she doesn’t want her son to grow up in foster care, a few days later Ellie was found murdered, so Olivia became Noah’s foster mother.

Nick is on duty and busts a man in his car with a prostitute. The girl Luna Garcia is clearly under age, and resists arrest. He manages to subdue her and bring her in. While she is in holding Detective Rollins and Odafin reveal to Nick that she is a material witness in the homicide of Noah’s mom Ellie. They have to move her for questioning, while they are walking her out of the building a gunman tries to shoot her right in front of the police station. Odafin manages to take him down without anyone getting hurt.

Olivia arrives at the station and meets her new detective Sonny, he’s been bounced around stations at Brooklyn and Staten Island. He wasn’t supposed to start until tomorrow but he heard about the shooting on the scanner. She fills Sonny in on Ellie’s case and says that the pimp Little Tino took the wrap, but they don’t think he did it.

Rollins sits down to question the man they caught in the car with Luna. He says that he called a number on Craigslist and a car came and dropped Luna off. Meanwhile, Olivia sits down with Luna and tries to get her to talk about what happened to about Ellie, but Luna insists she didn’t know her. Sonny interrupts and plays “bad cop” and tells her that if she cooperates he will pull some strings and get her a green card and a new identity. Olivia points out that her john is going to try to kill her as soon as they set her free.

Olivia pulls Sonny outside and demands to know why he told Luna that he can get her a green card. Sonny admits that he doesn’t know if he can, but he just wrote a term paper on it for law school and thinks she is a good candidate.

The shooter Diego Ramirez lawyered up while he was still in surgery, but Rollins reveals that his fingerprints match the prints on the gas can at Ellie’s murder. Sonny manages to get the address of the house from Luna that she is working out of.

Nick pulls over Joaquin, a man pulling out of the driveway of the house where Luna says they keep the girls. Nick tries to get him to talk, and gives him his business card with his cell on the back. He tells him that they will be executing a search warrant on the house later.

When the house is busted they find a room full of teenage girls. Joaquin tries to make a break for it out the back and Totuolo stops him. Joaquin tells him that he is a friend of Nick’s, as planned Totuolo lets him go.

Sonny and Rollins begin questioning the girls in the house, but none of them are really willing to talk. Sonny shows Missy a picture of her daughter on her phone, and Rollins offers to help her. They ask her where her daughter is, but Missy wants Rollins to order her something to eat. Totulo reveals that their plan worked, and Joaquin called Nick.

They realize that all the girls were using a service called Quick Ride to drive them to meet their craigslist dates. The guy at Quick Ride reveals that his contact person for the girls was Tino. Olivia heads to the prison to talk to Tino and offers him protection. Olivia demands Tino tell her who killed Ellie, but Tino shocks her and says that if she loves Ellie’s baby she will leave this alone and warns her that some of her own guys are working against her.

Nick meets up with Joaquin at a pizza place, he warns him that Tino might turn and if he does he can’t protect him. Meanwhile Tino is returned to general population at the police station, and is shanked by other inmates. Diego, the shooter that tried to take out Luna was killed in his hospital room, Missy the other prostitute was shot dead in a car with a john. Olivia realizes that “somebody is cleaning house,” and calls her babysitter to check on Noah. They are at the park and while Olivia is on the phone someone drives by in a van and shoots up the entire park with a machine gun.

Olivia races to the park and begins frantically running though the crowds looking for Noah, but he and the babysitter are okay. Ironically everyone was murdered right after Nick warned Joaquin about Tino. Nick meets up with Joaquin and Rollins and Totulo barge in and arrest Nick and Joaquin. Olivia sits down with Joaquin for questioning and demands to know who put the hit out on Ellie and tried to kill Noah.

Little Tino is conscious after emergency surgery, and Olivia and Totuolo pay him a visit at the hospital. His mother stops them before they go in the room and says that she doesn’t know who his boss is but gives them a tip that Selena breaks in all of the new girls and she is currently training a girl named Carmen. Sonny sets up a date on craigslist with Carmen, and she comes to his hotel room. He roughs Selena up a little so that she calls Carmen for help. Once Carmen and her henchman arrive at the hotel, Rollins and Totuolo barge in and arrest them. Olivia and Rollins question Selena, but she lawyers up, her pimp sends an attorney.

Olivia decides to bring Luna down for questioning and shows her a picture of Selena, Luna says that she is in charge of all the girls. And she calls them names and tells them that it is their fault they are whores. Luna breaks down and cries and tells Olivia that she was kidnapped and brought to American from her village. She reveals that Carmen was from her village too, and she was one of the first girls taken from her village in Mexico. They research the sex trafficking hub in Mexico, they pull up the pictures of one of the owners of the mansion where the sex traffickers are located. They realize that Angel Perez, the an that owns Quick Ride is the head trafficker. His mother lives in the mansion he built in Mexico, with all of the babies that the prostitutes give birth to.

They send federal agents to the mansion in Mexico and have them take pictures of the children in the mansion, they realize one of the children is Selena’s son Miguel. Olivia shows her a picture of Miguel, and tells her that if she turns on Angel they can see Miguel again, Selena agrees. Olivia demands to know who killed Ellie. Meanwhile at the jail Tino cuts a deal too.

With all of their signed statements, it is time to arrest Angel. They take a search warrant to Angel’s house where he and his wife are trying to leave town. As Olivia is arresting him he tells her that she is making a mistake because he knows where she lives. He pulls a gun on her and Totuolo shoots and kills Angel before he can kill Olivia. Later at the jail Selena is reunited with her son Miguel, just like Olivia promised. Olivia heads home and sits down with Noah and tells him that she has good news and the man that hurt his mom is never going to hurt anyone again.