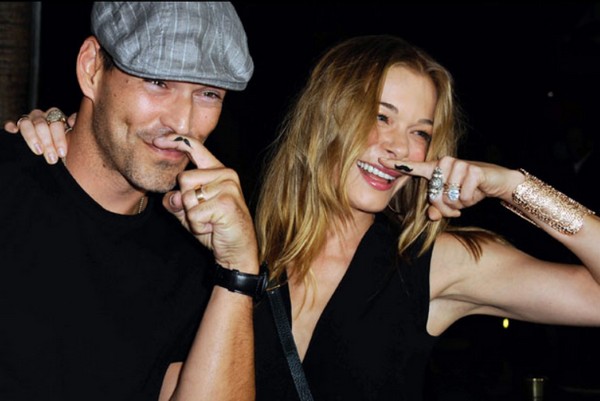 For those of you not familiar with the two, LeAnn Rimes exploded onto the country music scene in 1996 at the young age of thirteen with her smash hit Blue, which quickly earned her the distinction of Nashville royalty. After years of personal ups and downs throughout her teens and 20’s she ultimately achieved a celebrated music career that any artist would envy. Recently, however, Rimes career became overshadowed by the scandal surrounding her highly publicized on-set affair with actor, Eddie Cibrian, while both were married to other people. As LeAnn and Eddie got divorced and fell in love, they not only had the tabloids, paparazzi and blogs to contend with but also Eddie’s ex-wife, who took to any media outlet she could find to air dirty laundry. Through it all Eddie and LeAnn got married, and now Eddie shares custody of his two sons.

On tonight’s episode, the show will be about the daily lives of LeAnn and Eddie, the couple will face tabloid rumors about an expensive divorce; though this is happening Eddie decides to refuse a statement.

Eddie and LeAnn each introduce each other and she teases him about his attempts at singing. She says he’s a great dad and he says he loves Mason and Jake. He says that his wife is not a homewrecker and she says he’s not a man whore who’s after her money. He does admit they were married to others when they met. They say this is us – LeAnn and Eddie. The opening credits are imbued with some of the tabloid headlines about them.

They are headed to a movie premier – The Best Man Holiday – that he was in and he says contrary to what his ex-wife thinks, he does work. He compliments her jacket and says when they have their $50 million divorce, he’s asking for it. He mentions the divorce headlines and then he gets a text for Brandi. She laughs and reminds him about the headlines that say he has to text his ex for emotional support.

LeAnn says it was hard early on in their relationship to read all the lies. Eddie advises her to take a breath and let it go. LeAnn says five years later she’s adjusted. He tells her to tongue him on the red carpet and he won’t do it back and that will blow up in the headlines. We see them on the red carpet. People are yelling out $50 million about the divorce and other questions.

LeAnn says she wishes he would say something for her sake but he stays quiet. We see LeAnn at BMG signing documents. She tells her producer Darrell that she’s out of her contract. She says he’s had the worst contract in history. She says there is usually two to seven records at most and she’s done more like 14. She signs them all and Darrell says she’s free and he says he has chills.

LeAnn says she feels single again and Darrell agrees she has been limited to how she could use her creative voice because of her contract. He says she was put here to use her voice and sing and she gets teary. She says she wants to be free for a second to let it sink in because she has felt stuck for so long. She says she’s 31 and finally has the freedom to move on creatively and still has a career.

Eddie and LeAnn are at lunch with Liz, her bestie and Dave, Eddie’s bestie. They ride their motorcycles out to Malibu. Eddie and Dave has been besties since high school and Liz says she and LeAnn were instantly close. Their friends are close. Liz says they need to celebrate her contract being done and says she wants to get a tattoo. Eddie says no but she insists so he says to keep it small.

She jokes that tattoos are like boobs and can never be too big. They head to a shop and she wants a feather. Mark Mahoney, a tattoo artist, is famous and has done everyone. She lays down and he starts to work on her. LeAnn grimaces in pain and Eddie takes photos. She holds Liz’s hands and groans in pain. Eddie jokes that he’s never made her make a noise like that and LeAnn says he’s not doing something right.

Dave points out a magazine on the table that has a headline about them. It has the $50 million divorce headline and Mark says people don’t care about the truth. Eddie reads that it says he has only had a modest acting career. LeAnn says she wants him to say something and Liz says she doesn’t want the kids to see it. LeAnn says the boys know the tabloids are BS and that they saw one that said that their parents were getting back together and told LeAnn they know for sure that one isn’t true.

Eddie says the likelihood of him getting back with Brandi is about the same as the chances that Bigfoot really exists or a zombie apocalypse. The tattoo is done and LeAnn checks it out. She says it’s pretty and Eddie agrees. She tells him to go next and calls him a pussy. He says he’s going skydiving and asks if she’ll jump.

She says she’s singing the national anthem at a skydiving event and asks if she’ll jump with him. She says she would shit herself and he says that wouldn’t be nice to the person that’s holding her in the tandem jump. She asks if she can think about it and give him an answer later.

At Prohibition, Eddie is eating with his trainer MJ. MJ is eating a burger with egg, bacon and cheese. Eddie says he’s a good trainer and friend but not so great on nutritional advice. Eddie is grossed out by what he’s eating. He asks Eddie about the premier and he says the he and LeAnn had a little argument about the divorce story.

He says she wants him to comment but he doesn’t want to and MJ asks why not. Eddie says if he comments, it will feed it but MJ says he may need to do it anyway – happy wife, happy life – and says you need to take one for the team. He says he wants dessert and Eddie laughs. He told Eddie he brought him there as job security.

Eddie and LeAnn go to the skydive event and they meet the coordinators. It’s called Wings of Inspiration and it’s an organization that takes wounded veterans skydiving. She still hasn’t decided if she will. They talk to some of the veterans. Mario Lopez is covering the event for Extra and Eddie says he’s skydiving. They sit down for an interview.

Mario asks if they’re working on babies and LeAnn says they work on it all the time. He mentions the divorce headline and congratulates her on the $50 million and asks if it bothers them. Eddie doesn’t want to comment but takes MJ’s advice and says it’s ludicrous that he would text Brandi. LeAnn says they got a laugh out of it because it was ridiculous.

LeAnn is really happy that he spoke up and says now she has to do something for him. She says she’s going to jump. They go to show her what to do and get her in a jumpsuit. They head out. LeAnn sings the national anthem very nicely. She says she’s sung it in big places but this is different because she’s standing very close to the veterans singing with no microphone. The crowd cheers. They go to jump.

They get on the plane and are told to buckle up. LeAnn asks why you need a seatbelt when you’re going to jump out of a plane. Eddie holds her hand. LeAnn says if she dies the tabloids will have a great end to the story then jokes and says if she dies, they’ll probably say he pushed her out and stole her 50 million.

They are both hooked up to tandem jump. LeAnn is at the door with her guy ready to go then say wait, wait, wait. But he doesn’t. They’re out of the plane and she says it’s incredible. Your stomach is in your throat and then you’re free falling. She says she couldn’t think about the tabloids, her record contact or anything. She says it was a moment of perfect freedom.

They touch down and she and Eddie high five with Mario. He tells her he’s proud of her and says he would love her if she only had $10 million and she says she would love him if he was fat and ugly. Then she says who is she kidding, she wouldn’t. We see them hug and kiss after the skydiving.