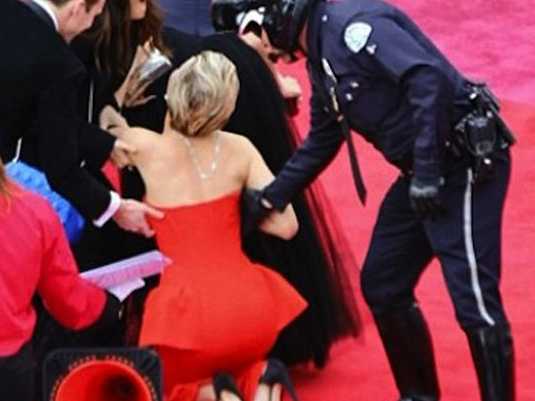 Lindsay Lohan must not have garnered enough attention from her “mysterious” sex list leak, and recent miscarriage revelation, because she has reached a new low. Yes, Lindsay actually made herself look even worse after another pathetic grab for attention and another desperate attempt to excuse her unprofessionalism and explain why she is not getting work.

Lindsay hits below the belt in an interview with Kode Magazine, in which she also covers, by implying that Jennifer Lawrence only gets roles by sleeping around. Kode Magazine described that the conversation with the trouble star turned to Jennifer Lawrence. That was when Lindsay went in for the kill. Speaking about Lawrence’s stumble on the red carpet, Lindsay blurted out, “She’s so fake and I’m sorry, I’m not going to f*ck for roles.” Somehow I have serious doubts about the last part of her comment.

Amazing that Lindsay just cannot seem to see the writing on the wall. She is an addicted has-been who hasn’t starred in anything decent since “Mean Girls.” And that is being VERY generous considering she’s not winning any Academy Awards for that one. She is unpredictable, she lies, she is unprofessional and demanding, and she is a liability. Perhaps that is the reason you aren’t getting work Lindsay. I’ll be that in the right light, you can see Lindsay’s pale shade of pasty-white turn green while she watches Jennifer Lawrence in movies that people actually go to see.

Lindsay can make up any excuses she wants to try to explain why she is being overlooked for roles, but bringing Jennifer into her lame explanation is just pathetic, especially considering that Jennifer has been very serious with boyfriend Nicolas Hoult for quite some time. Typical Lindsay… always someone else to blame for all of her mistakes. Maybe she was busy getting pregnant the day they talked in rehab about taking responsibility for your own actions. Lay it out there CDLers…I know you have something to say to Lindsay on this one!

Editor’s Note: Lindsay has revealed not only what she she thinks about Jennifer Lawrence but also what she hears – she isn’t making this up out of bitterness or spite – Lindsay is too stoned and too scattered to bother filtering normally when she speaks. Her opinions on JLaw are not merely her own – she is repeating what she hears – and what she hears is Hollywood insider gossip.