Lindsay Lohan’s Naked Run Through Selfridges: The Actress Lets It All Hang Out, Kate Moss Horrified She’s In London! 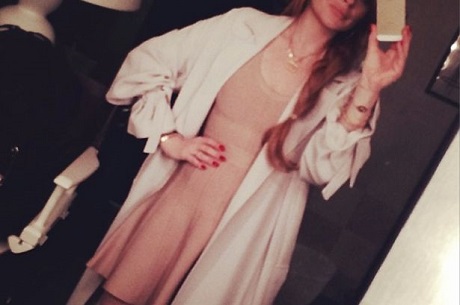 Lindsay Lohan’s smile has always been a bit unsettling – those plump, snarling lips are enigmatic reminders of her failed film career. Drunk-eyed Lohan’s druggie shenanigans have turned her into the female version of Edward Furlong, which is a rather stupendous feat because Furlong is a non-existent example of young-fame-gone-bad. Lohan’s horror face is now available in the UK, but don’t expect a curtsy from the cocaine eater anytime soon.

The actress landed a role in a West End show called “Speed-the-Plow”, so she packed up her cocaine stained mirrors, made the big move to a different county and bought herself a one-way-ticket to the UK drug scene. Supermodel and drug addict Kate Moss wasn’t too keen on Lohan’s arrival – the two terrors had a huge argument over Moss’s husband Jamie Hince.

Lohan and her missing nostril contacted Hince when she arrived in the UK, but the territorial Moss didn’t like the idea of Lohan and Hince getting their Casablanca on. (Hince worked on Lohan’s music last year). The supermodel started an argument with the actress at Chiltern Firehouse – a local celebrity hangout named after Bruce Jenner’s penis. According to an onlooker, “The argument went on for a while and Kate seemed extremely annoyed with Lindsay for contacting Jamie. She was ranting about it to a fellow diner at the restaurant.”

Lohan’s little UK adventure went from Kate Moss to ohmygawdexorcism within a matter of days.

The actress visited Selfridges for some much needed retail therapy (fighting with a supermodel is a very traumatic experience), but after trying on a few dresses and a couple of witch hats, a naked Lohan stormed out of her dressing room, laughed hysterically, and ran around like a crazy person.

According to a source, “Lindsay took some items into the changing room. Halfway through, she ran out of the room with nothing on and was chased by members of staff who were trying to cover her up. She was laughing her head off and literally giving staff the run-around as customers looked on.”

No one knows why she went off her rocker. It could have been a dressing room demon or a rotten cucumber sandwich. WARNING: Keep Lindsay away from pubs, supermodels, and department stores — because she as mad as a fat bat!