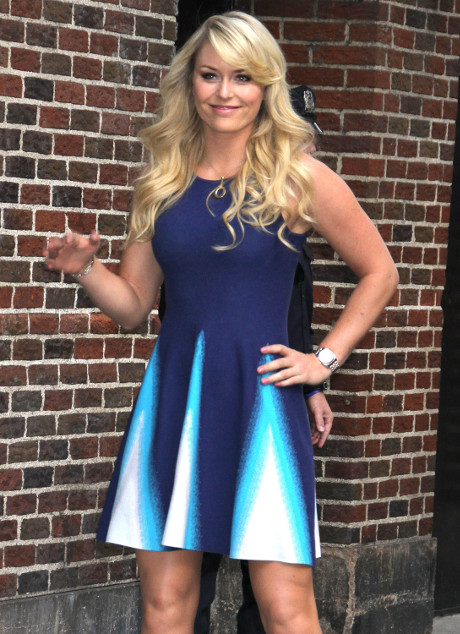 Lindsey Vonn gained some major media attention in the last year by dating pro golfer Tiger Woods, and her quest for attention continues in her most recent interview. While the pro skier won’t be competing in this year’s winter Olympics due to a rather severe knee injury, she’s trying her best to soak up as much limelight as is humanly possible before the media loses interest in both her and her career. Harsh, I know, but it’s the truth, folks — and we only speak the truth here on CDL. The pro athlete spoke out in an interview with Self Magazine and threw some major shade on celebrity women and their bodies.

When asked if she ever felt secure about her own body, Lindsey says, “Definitely. It was hard to go to the Met ball [last May], with people who eat lettuce and a Diet Coke for dinner. It’s difficult to be at events with a room full of women who weigh half as much as you do. That’s always tough. I don’t envy them, though, because so many of them are skinny-fat. They have more cellulite than most people. I feel like I need to give them a cheeseburger. It’s sexy and beautiful to be strong.”

Her statements seem a bit cruel and petty and, I think, a bit inappropriate for a magazine interview of this nature. Honestly, who does this girl think she is? People shouldn’t be put down about their bodies — no matter their size — and I think Lindsey’s status as a role model for younger women has just fell a couple of notches. It’s fine to talk about insecurities, how you perceive yourself, and how you’ve come to accept yourself after undergoing that process. But don’t you think it crosses the line when that mission of self-acceptance puts down other people and their body types?

Leave your thoughts in the comments section below. We’d love to hear your opinions on the matter. Do you think Vonn was out of place — or do you think people are overreacting for nothing?