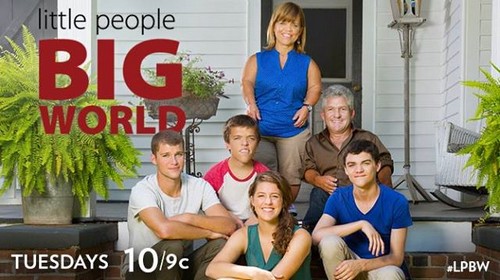 Tonight on TLC’s Little People, Big World returns with an all new Tuesday September 16, Season 8 episode 3 called, “Don’t Rain on Our Parade.”  On tonight’s episode Pumpkin season’s approach inspires an idea to drum up business by entering a float in a local parade. Meanwhile, Jeremy and Audrey are overwhelmed by wedding plans with only a few months to go.

On last week’s episode as plans for Jeremy and Audrey’s wedding started to ramp up, Matt and Amy were forced to confront their crumbling relationship head on. In an attempt to reconnect, the family embarked on a weekend ski trip to spend some much needed quality time together.  More happened!  Did you watch last week’s episode?  If you missed it we have a full and detailed recap, right here for you.

On tonight’s episode hoping to bring in more business this pumpkin season, Matt and Amy invest in an elaborate float build to feature in their town parade. Later, with only a few months to go until their big day, Jeremy and Audrey find themselves knee deep in wedding prep.

Tonight’s episode of Little People, Big World begins with Jeremy and his fiancée Audrey planning their wedding. Jeremy just proposed to her, but they are having a short engagement, and plan to say their “I Do’s” in just five months.

Molly Jo has returned home from Costa Rica, and she sits in the kitchen catching up with her mom Amy. She’ll be home for a couple months, and Amy can’t wait to spend time with her. They gossip about Jeremy and Audrey’s wedding, and Molly reveals that Audrey is going to have eleven bridesmaids. Amy asks her if she will get married on the farm as well, and Molly says it depends where her groom is from.

Matt is busy preparing for pumpkin season which is a huge deal at the Roloff farm. Amy convinces him to build a float advertising the farm for the Starlight Parade in Portland, there will be nearly 400,000 people there and it will be televised on their local TV stations. Matt thinks it will be a good way to drum up business, but the only problem is they only have two weeks to build the float.

Matt already has a huge metal pumpkin that is being built that he planned to put up at the farm, he decides to try and put it on the float. The only thing is the pumpkin is huge, and it won’t fit on the float. While they are trying to take it back off the float, the huge wire pumpkin nearly crushes Amy. Matt is frustrated that the pumpkin isn’t going to work, and is so concerned about the float he doesn’t even notice that he almost crushed Amy.

The next day, Matt calls in reinforcements and has his old friend come over to help him design the float. They decide to just order a giant pumpkin balloon to put on the float. They decide to take the old trailer and throw some hay bails on it, and they will have to light it up with tons of twinkle lights since it is a starlight parade, and will take place after dark.

Matt recruits Amy and Molly Jo to help, and they begin trying to transform their flat bed in to a mobile pumpkin patch. They build a sturdy platform on the trailer so that all of the Roloff’s and their friends and family can ride on the float during the parade. Matt puts Molly to work and has her build the lattice around the float. It starts raining, so they can’t pain the trailer. Instead they head inside to paint some of the smaller props. Matt jokes that it is “raining on their parade.”

The next day Jeremy and Aubrey head out to lunch at their catering company’s restaurant to taste items for their wedding menu. Amy is surprised to learn that some of the recipes are out of Amy’s family recipe book. They have also decided to put grilled peaches on the menu since Audrey grew up across the road from Jeremy eating grilled peaches from the Roloff farm.

Amy heads out of town for her speaking engagement and leaves Matt home to finish up the float without her. Amy stops at the work shop and tells Matt she will be home just in time for the parade. He grumbles about why he always has to “solve all of the problems.”

It’s six days before the parade, and Matt has all of the kids hard at work on the float. They make foam pumpkins, and corn stalks and pumpkin vines out of QVC pipes. Zach, Molly, and Jacob take a break and head out to lunch with Zach’s girlfriend Tori. Molly fills her in on all of the excitement in Costa Rico.

Back at the farm the custom inflatable pumpkin that Matt ordered finally arrives. They inflate the ten foot pumpkin and Matt marvels at how great it is going to look on their float, and then he realizes that they spelled their name wrong and wrote “Roroff Farms” on the pumpkin instead of “Roloff Farms.” Matt gives Molly a marker and has her color in the “r” and turn it into an “l.” They are pleasantly surprised that you can barely notice that they changed it.

It’s the morning of the parade, and the ROloff family are rushing to get everything tied down to the float so that they can take it to the parade staging area down town. Once they arrive they only have until 3:00 to assemble the float. Zach has an “Oversized Load” flag on his car but once they hit the freeway, the sign rips in the wind. They pull over to fix the sign and then they have to try to merge back on to the highway. After they drive a few miles the sign rips again, Jeremy tells them to just keep going because if they stop again they are going to be late.

They all finally arrive at the staging area, and they are late. There is a mad scramble to put the float together again and get it ready for the parade. Unfortunately, their huge orange inflatable pumpkin has a leak in it, they finally get the balloon problem straightened out, but they are out of tie. They load the family on to the float and are forced to get in line, unfortunately Amy still hasn’t arrived. The parade starts to move and at the last second Amy arrives and climbs on to the float. She gushes about how great the float looks and takes pictures of the family together before they head out on the Starlight Parade.

They are number 79 in the parade, so they sit idle for nearly an hour on the float. When it is finally time for them to move…Jeremy tries to start the tractor and it won’t start. Everyone on the float panics because they are holding up the entire parade. Jeremy wiggles a few wires under the hood, and the tractor miraculously starts and they head down the street waving at the thousands and thousands of people lining the streets of Portland.