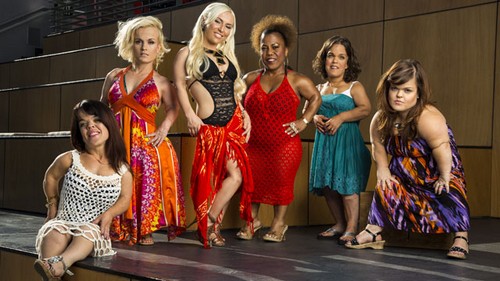 Tonight on Lifetime LITTLE WOMEN LA premieres with a new episode called, “The ‘M’ Word.” On tonight’s episode you’ll get to meet the ladies of “Little Women: LA,” they may be little but they like to live life large.

Each hour-long episode of Little Women: LA features longtime girlfriends Terra Jole, Tonya Banks, Elena Gant, Christy McGinity, Briana Manson and Traci Harrison. They laugh, cry, compete and fight with one another, but through it all they share a special unbreakable bond. And, while dealing with everyday challenges like the rest of the world, they prove that height is just a number. There’s nothing small about this loud and proud group who can teach us all a lesson or two about living life to the fullest.

On tonight’s episode meet the ladies of “Little Women: LA”, Terra and Tonya enroll the ladies in a sexy dance class so they can all harness their inner goddess. While the ladies celebrate the end of Briana’s marriage, Christy drops some very obvious hints about her desire to get married to her boyfriend Todd.

Tonight’s episode is going to be a fun one, which you won’t want to miss. So be sure to tune in for our live coverage of Lifetime’s Little Women LA Season 1 premiere— tonight at 10PM EST!

Tonight’s episode begins with the Terra talking about her life as an entertainer and discusses her boyfriends of five years, Joe. She is with Tonya. Tonya talks about her daughter Angelique who is now away at college. She explains that she is single and anxious to meet a man now that she is alone in the house. Eventually, Aisha, a choreographer shows up and the girls get to work. Briana joins the ladies and shares a little about her life as a new mom to daughter Leiana. Traci shows up next and explains that while the other ladies are the sinners, she is the church-going saint. Next comes Elena, the self-described “Russian Bombshell.” She feels like American women are a little crazy and very jealous of her good looks. Terra seems to have her own opinion on that and thinks Elena married her husband simply for a green card. Elena thinks Terra is threatened by her beauty. Christy shows up last. She explains that she doesn’t take any sh*t from anyone, not even Terra.

After everyone has arrived the girls start practicing and strutting their stuff. They are working on developing some sexy moves for their acts. The girls explain to the choreographer what some of their limitations are as far as movement. They work on their sexy moves and Traci shares that she doesn’t care that the ladies think she is uptight. But it obviously does bother her as shortly after she tries working it she storms off saying she cannot do this. Terra goes to check on her. She tries to counsel her on feeling more comfortable. The ladies celebrate with their choreographer by having champagne.

Terra and Joe go out to eat. She shares that she is not happy with Elena and she’s worried that she might take away work from her since they are both blond little people. Christy and her man go shopping for furniture. They cannot seem to agree on anything. Todd is planning to move to LA to be closer to Christy. Christy is putting the pressure on Todd for a ring. She is ready to get engaged and wants him to step on it. Christy and Todd argue because Todd feels like Christy is forcing him for a ring to show off to her friends. He tells her she is taking the love out of the whole thing and that maybe he needs to rethink their relationship if she is going to corner him. She explodes after that comment.

Briana, who is recently divorced, is ready to meet someone new and tonight may be her chance as Elena’s husband is bringing a friend to meet her. Briana’s date arrives and she is very happy with the 6’2 hunk. Briana’s divorce party is coming on Saturday and while all the ladies are coming with their men, Briana is not sure if it is appropriate to ask her date to a “divorce party.” She takes a chance and asks him to join her and he accepts the invite.

Everyone start’s arriving at Briana’s party. It is a little tense at first when Briana and Todd see each other because the two used to date! She is a little nervous about seeing Todd there, so she is really hoping her new love interest, Brandon, shows up. Christy later asks Briana if she is okay that she brought Todd and Briana tells her it is fine. Christy is so nervous about Briana still having interest in Todd that she begins taking her around to meet random men at the party. Finally, Briana is saved when Brandon shows up.

As Briana and friends get into bikinis to hang out in the hot tub, Briana sees Brandon flirting with Angelique, Tonya’s daughter who came to the party. She is not happy at all. Later, when the ladies are in the hot tub together, Elena tells them about her upcoming Vegas show. The ladies feel the show she is involved in is degrading to little people and they all argue over it. Elena is the only one who seems to think it is appropriate to be referred to as a midget and who is comfortable performing in a show where a “midget” is ejected from an elephant’s ass. All the ladies disagree and Elena thinks they are all just too uptight. The rest of the party starts to take notice as the hot tub is getting more heated from the ladies than from the hot water.

Later, when Briana is getting gout of the Jacuzzi, Todd corners her and attempts to flirt with her. He keeps looking at her chest and when he twice asks her for a hug, Christy sees this and explodes. She yells his name and tells him they are leaving. She is extremely upset. They argue outside and although it was obvious that Todd still has feelings for Briana, he does a little sweet talking that melts Christy enough to forgive him. They kiss and make up.

Next week is going to get really exciting as Terra’s man flirts with her nemesis Elena. Lots of drama and catfighting is in store next week, so meet us here, same time, same place!