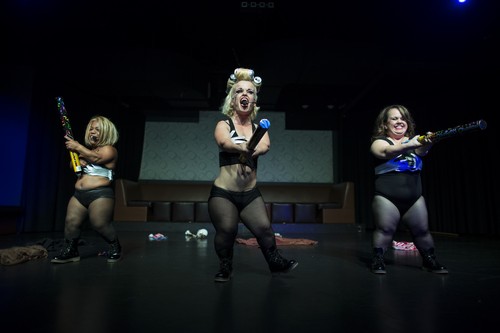 Tonight on Lifetime LITTLE WOMEN LA airs with a new episode called, “Little Women, Big Drama.” On tonight’s episode Christy shops for an engagement ring, even though Todd hasn’t yet proposed. Meanwhile, the ladies prepare for a pinup-themed photo shoot; Traci reveals her wedding date; and Elena shares an emotional story about growing up as a little person in Russia.

On the last episode we met the ladies of “Little Women: LA”, Terra and Tonya enrolled the ladies in a sexy dance class so they could all harness their inner goddess. While the ladies celebrated the end of Briana’s marriage, Christy dropped some very obvious hints about her desire to get married to her boyfriend Todd.  Did you watch last week’s episode?  If you missed it we have a full and detailed recap, right here for you.

On tonight’s episode Christy goes shopping for her engagement ring even though Todd hasn’t popped the question. While the women prepare for their “pinup girl” themed photo shoot, Traci reveals that she’s set her wedding date, which aggravates Christy, and ignites a race to the altar. Terra and Elena temporarily mend their tense relationship when Elena reveals a heartbreaking story about growing up as a little person in Russia.

Tonight’s episode is going to be a fun one, which you won’t want to miss. So be sure to tune in for our live coverage of Lifetime’s Little Women LA Season 1 Episode 2— tonight at 10PM EST!

Tonight’s episode begins with Christy dong some ring shopping. If you watched last week or read our recap, you know that this girl is p-u-s-h-y. Traci tries to get her to slow down a bit and maybe let Todd do the ring shopping. Terra is with them as well and shares with the girls that she has photo shoot next weekend that needs five little women in total. That means, all the girls will join…except Elena.

Elena and Briana go shoe shopping for some high heels. Briana feels bad that Elena keeps getting excluded because of their argument over what Elena describes as the “M” word. Elena says she thinks Terra is jealous but feels bad regardless that they cannot get along.

Terra and Tonya go work out to prep for the photo shoot. Shortly after, the ladies (minus Elena) go shopping for dresses for the photo shoot. Tonya asks Christy about her ring shopping excursion and wonders why she didn’t include Todd. Christy says that Todd knew about it and explains that it is her biological clock that is making her push for an engagement. Meanwhile, Traci comes up in the conversation and shares that she and her fiancé have officially set a date. Traci and Christy get into it over the fight for the spotlight, which Traci thinks Christy is trying to steal. The girls try on dresses and Christy has nothing good to say about anything Traci tries on.

Later, at the tailor, Tonya tells Christy that she may have gone overboard when talking to Traci. Christy says everyone knows her personality. She does agree to ask Traci to lunch and apologize anyway. Christy asks Terra why Elena is not included and Terra shares that a big part of it is that she has no problem referring to herself and her peers as ‘midgets.’ Because this is such a derogatory label for little people, Terra is still upset and says that likely because Terra never went through the torture they did growing up she just doesn’t get it. Terra says she looks more like a child from behind because she doesn’t have typical little people features.

Christy takes Traci to lunch and apologizes. Traci shares that they were best friends until Christy’s drinking got out of control. During the conversation, it comes out that Christy has been sober for four years, but despite that Traci seems to still hold issues from when she was drinking against her. After lunch with Traci, she heads over to see Todd, who is playing Bocci with friends. She walks up unexpectedly and Todd doesn’t see too happy. She congratulates his friend on his recent engagement and declares, “now it is a race.” Todd starts getting even more upset. She leaves and is sitting in the car. Todd comes over and asks what is going on because he was supposed to call her when he was done. She said she couldn’t get in touch with him and had exciting news…she found “THE” ring. Todd replies that it seems everything is done…obviously irritated that she is not letting him do this on his own.

That night, the ladies meet up for drinks. Elena shows up and Briana strongly encouraged her to. Terra is ready and armed to ask her about her childhood, ready to make her understand all the bad things the others have gone through, and expose what was likely a cushy life she had. The conversation starts off on a light note talking about men. Terra jumps in and explains the whole photo shoot deal and why she was not included. Terra tells Elena some of the things the five ladies have experienced…getting thrown in lockers, trash cans, etc. She tells Elena that likely she didn’t go through any of that. Elena tells her a far worse story of her childhood. Because she was extremely bow-legged, when she was 5 she was tied to a bed in the hospital in what they thought was the only possibility of helping her. For two years she remained stuck to the bed. Her mom could only visit for two hours once a week. The ladies are shocked and while Terra should feel empathy, she seems more disappointed that Elena may have experienced even worse things than she has. All the girls are crying. Terra finally admits that she feels crappy. Terra then finally says she is sorry for judging her. The ladies, all in tears, tell Elena how brave she is and that they are glad she is friends with them.

Terra comes home and shares with Joe that her hair appointment with Traci went terribly and because of what happened with her and Christy, Traci is refusing to go. Joe encourages her to invite Elena, but she refuses for petty reasons, claiming her boyfriend thinks she is hot. She relents out of desperation and calls Elena, but Elena already has plans and cannot do it.

Todd and Christy are out to dinner. Christy thinks that this is the moment that he is going to propose. He tells her he has something to ask her. She gets very excited, but then back to depression mode when she finds out that his big question is whether or not it is okay if his parents can come for a visit.

At the photo shoot, the ladies arrive but the photographer keeps mentioning how it is not working with only four girls. All of a sudden, Elena comes to save the day! Even though Elena saved Terra, Terra becomes very jealous that the photographer has put Elena on the hood of the car they are using as a prop and the girls are not even shown in the background. The photographer has taken a liking to Elena and it is burning Terra up! When they all meet up to look at the pictures, Terra is complaining about all the pictures of Elena. Elena stands up for herself and asks Terra what she should have done. She was just following the photographer’s orders. Christy thinks Terra needs to get over it.

Tonight’s episode ends with Christy getting the ring she wanted when Todd proposes on top of a hill with a gorgeous view. Christy is beyond happy and Todd is probably happy he won’t have to keep hearing her complain about it! Congrats, Christy!

So, CDLers, are you liking this new show? Who is your favorite little woman so far? I think Elena and Christy have my vote as most entertaining and real! Weigh in below.