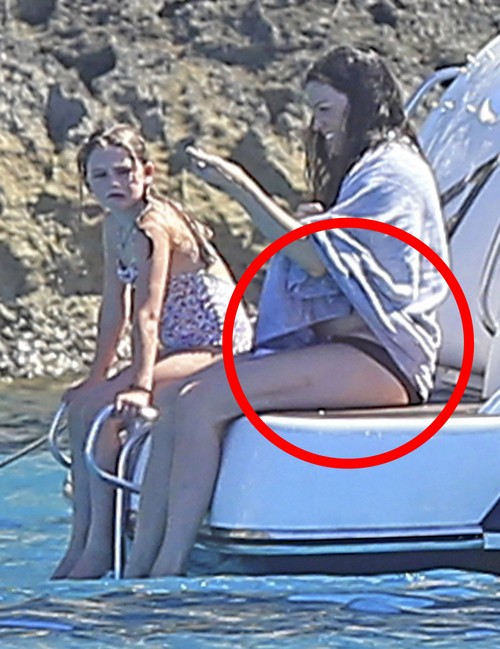 Could Liv Tyler be pregnant? Liv was spotted catching the last of the summer rays on a yacht recently, but it was her determined attempts to hide her stomach or baby bump that drew pregnancy speculation. She tried everything – towel, angles, wraps, blankets, shirts. Whatever it is that she’s hiding, she definitely does NOT want anyone to see. Is she pregnant, is that a baby bump?

Now, I’m assuming that she knows the photographers are there, otherwise it wouldn’t make sense for her to work so diligently to hide her stomach. But even then, one wonders why she even wanted to cover it up in the first place. Is it that she didn’t want the news broken by some tabloid, when she wanted to do it herself? Or is she hiding something deeper?

Liv has been dating David Beckham‘s BFF Dave Gardner for a while, and she and Dave were spotted on their vacation getaway together. So if she is pregnant with Dave’s child, I’m not sure why she felt the need to hide it. Pregnancy is natural, and celebrities getting pregnant is nothing new.

Of course, there were also rumors claiming that Liv was having an affair with Justin Theroux while filming The Leftovers, so maybe the baby isn’t Dave’s after all. It would also explain why she’s going out of her way to hide any traces of a growing baby bump, especially if she doesn’t intend to keep the baby.

Now, that last bit of speculation was completely based on rumors, not fact. But with that being said, it’s most likely that she just didn’t want the public to know before she was ready to admit the truth. Or, you know, she just gained a lot of weight and doesn’t want the pictures uploaded to the net.

If Liv is pregnant, then this would make it her second baby. The first time, she gave birth to Milo [Langdon] when she was still with her first husband, Royston Langdon.

Liv Tyler enjoys a dip in the ocean with the two men in her life, her son Milo and her new boyfriend Dave Gardner, while vacationing with family and friends in Formentera, Spain on August 26, 2014. Liv took a lot of pictures of the children with her iPhone while soaking up the sun before taking a swim in the water. Liv also seemed to be trying to hide her belly from view- she quickly covered up both while in a bikini and when wearing a dress. Could Liv be pregnant again?!