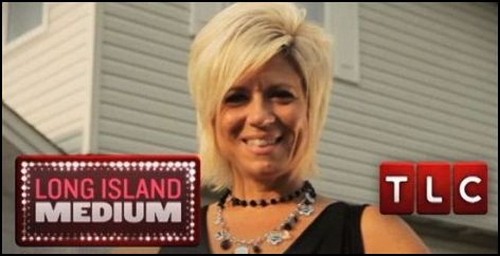 TLC’s reality show LONG ISLAND MEDIUM returns tonight with it’s premiere episode of season six. Tonight’s episode is called, “OTR: Las Vegas Part 1” and Lady Luck is a lady named Theresa Caputo! Theresa is on the road surprising lucky fans with readings in Las Vegas! The whole Caputo family comes along and takes in the best Vegas has to offer. On tonight’s show the first of a two-part season premiere, the Caputos mix business and pleasure in Las Vegas, where Theresa interrupts a woman’s recording session to help her connect her mother, and another woman gets a surprise at her bachelorette party.

Tonight’s episode of Long Island Medium takes place in Las Vegas, Nevada. Theresa and her husband Larry head to the casino to try their luck at gambling. They sit down at a Black Jack table, and she picks up a vibe from the card dealer. Although the dealer doesn’t believe in mediums, she is blown away by how much Theresa knows about her deceased cousin and grandmother. Theresa relays a message to the dealer from her cousin Logan, He wants her to know that he takes responsibility for his death and he is okay.” The dealer is amazed and says that Theresa is “giving her chills.”

Next Theresa heads to a recording studio to surprise a girl named Jessica, her friends wrote in to Theresa asking for a reading for Jessica. Jessica is shocked when Theresa arrives at the studio and she is excited to see if she can connect to her mother. Jessica and Theresa sit down at a table, and Theresa reveals that her mom is reaching out to her. Theresa says she sees pill bottles, and Jessica confirms that her mom was a substance abuser. Jessica’s mom conveys a message to her through Theresa, and apologizes for being verbally abusive and hurting Jessica when she was a teen. Jessica is relieved though, because if her mom is apologizing, then that means she is finally in a better place. Jessica’s mom goes on to say that she is proud of her and who she has become.

The next day Theresa and her hubby Larry head to the buffet with their kids for a family dinner. Larry Jr. is annoyed because they entire time Theresa is talking to them she is staring at strangers across the room. Larry and Larry Jr. head to the buffet for more food, and Larry Sr. bets $100 that Theresa on’t be able to make it through the night without reading someone at the buffet. While the Larry’s are gone, Theresa runs over to the table that she was staring at and introducers herself. She connects with one of the women’s fathers, and reassures her that her Dad supports her decision to take him off from life support and thanks her for where she spread his ashes after his death. Theresa returns to the table, and Larry tells her to pay up, because she clearly didn’t make it through dinner without doing any readings.

The next day Theresa crashes a woman named Tricia’s bridal shower at the hotel. Tricia’s sister Christina emailed Theresa and asked her to come because she wants her little sister to be able to connect to their dad, who passed away, before she walks down the aisle. Theresa is able to connect to her Dad, and reassures Tricia that her Dad is giving her and her fiancé his blessing and supports their upcoming marriage.

Next Theresa heads to the Palms to do a reading on Lori. Her daughter Alex called Theresa to come read her mom since her dad recently passed away and she thinks her mom is “lost” since then. Lori is shocked to see Theresa and she can’t wait to connect with her husband Richard, he passed away ten months ago. Theresa says that Richard loves Lori’s hair, and Lori cracks up because she just dyed her hair two weeks ago and Richard hated her hair red. Theresa conveys to Lori that Richard is sorry for leaving her, but he wants her to know that he has gotten through this on the other side. She reassures her that every time she thinks she feels him touching her, that his soul really is touching him and she isn’t imagining it. Lori thanks Theresa profusely for her reading, and says that she feels ten times better.

Before their Vegas trip comes to a close, Larry Sr. and Theresa head out on a gondola ride. Theresa picks up a vibe from the gondola driver Matteo, and reveals that she is connecting with his deceased father. She reassures Matteo that his father knows that he kept his Navy ring and is thankful he takes care of his posessions and wants Matteo to know that he is proud of how happy he has become. Matteo is blown away by her reading, and is happy for once that his passengers are entertaining him and he doesn’t have to entertain them.