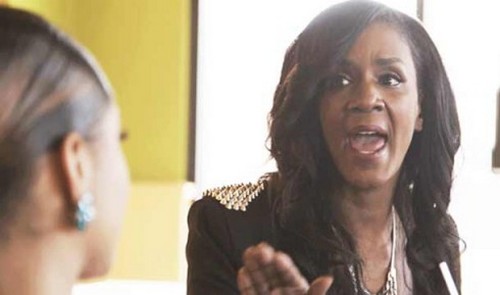 On last week’s episode Dawn and Mimi were on a mission to bring Stevie J and Joseline down. Karlie and Yung Joc continued their roller coaster relationship. Rasheeda paid a visit toirk’s young and sexy nanny candidate. And when Scrappy’s 30th Birthday party put his two ladies at odds…things turned ugly.  Did you watch last week’s episode?  If you missed it we have a full and detailed recap, right here for you.

On tonight’s episode, in an attempt to clear the air between Bambi and Erica, Momma Dee arranges a meeting between the three of them, but it seems that Momma Dee’s efforts may only cause more tension between the two women, especially when she takes Bambi’s side. If Momma Dee was hoping for a peacefull sit down between the two women in her son’s life, then she may be in for quite the shock because it’s pretty obvious attitudes are at an all time high at this meeting.

Benzino has had enough with the threats against his magazine. He’s fed up with the words like “libel” being thrown around and thought the best way to get rid of Mimi and Dawn was to get them in a meeting with Stevie J. Benzino was hoping that one meeting would clear up their ideas on Stevie’s marriage, but the ladies weren’t willing to listen to anything Stevie had to say. He gave them a date and said he was in fact married. And still they wanted Benzino to print a retraction saying differently and when he refused – they walked away. It seems they didn’t want to stick around to perpetrate “fraud”. Like that’s the worst thing these two have ever done!

Afterwards Mimi told Dawn she had it too. She realized it was a pointless fight and just wanted to step away. Though Dawn wasn’t quite ready to give up on a working relationship with her. By now everyone has heard about Mimi’s sex tape and so Dawn offered her services. She knew that Mimi was going to need help in putting her own image out there so she offered to see what she could do to make that happen.

And Mimi wants to see how she can turn her sex tape into something positive. If not really for her then at least for her career. Sometimes a good career move must come first, no matter what!

Rasheeda and her family went to a photo-shoot. It was supposed to be everyone there and smiling yet Kurt didn’t like the fact that Rasheeda had invited her mother to do the photos as well. He and the older woman haven’t gotten along since his cheating was revealed. And he doesn’t want her around bad-mouthing him in front of his children (that includes the baby he’s only now acknowledging as his). So using Kurt logic, he brought up Jasmine again!

Kurt has been desperately trying to push a new baby-sitter onto his wife while Rasheeda is able to right through his juvenile antics. She knows the only reason he wants Jasmine, who’s masively under-qualified, to come work for them is because he’s interested in doing the nanny. Something he could do when he’s single seeing as Rasheeda won’t allow him to make a fool out of her twice.

So Kurt needs to let Jasmine go! Rasheeda has overlooked more than any other woman would have!

Then there’s Tammy. She and Joseline still have a few issues to work out between them. Joseline didn’t like the way Tammy was trying to style her even though that is the other woman’s job – so she threw a lot of shade at Tammy. And Tammy was at first upset by the sudden change in Joseline’s demeanor. She’s only willing to overlook that because she thinks that if she clears the air then maybe Joseline could go back to being the first girl that Tammy met. You know the one she liked.

But Joseline doesn’t like that Tammy told Mimi about her business. Her photo spread was top secret and only a handful people knew about it so the fact that Mimi was even aware of it meant someone talked. If it wasn’t Stevie then it had to be Tammy – that’s something Joseline won’t let slide. Later the ladies planned on sitting down for drinks and with both of them wanting to confront the other.

Joseline wanted to keep it cordial by speaking calmly and frankly all Tammy wanted was to be heard. Neither of them got their wish when Tammy brought up Joseline’s behavior. Joseline felt like something should have been said back when the incident happened. In her opinon, “Who sits on a grudge?” And what’s letting it “marinate”!

And Tammy wasn’t going to be looked down by someone like Joseline. A screaming match ensued and the bodyguards stepped in prior to actual fists flying!

Speaking of bad ideas, Momma Dee arranged for Bambi and Erica to hash it out. She thought they should clear the air and instead she truly did invite drama this time. Erica and Bambi barely made it through introductions before they started a brawl. After that, Bambi felt she was done. She was sick of Momma Dee and thought Scrappy to be too much of a momma’s boy.