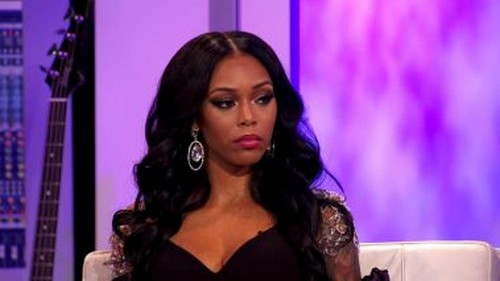 On last week’s episode Benzino exposed Joseline, impacting his relationship with Stevie, in the Season 3 finale. Also: Waka received unexpected news that jeopardized his future with Tammy; and Mimi made a big decision about Nikko. Did you watch the last episode? If you missed it we have a full and detailed recap, right here for you.

Tonight’s the first part of the epic three segment Reunion show and by the looks of it – this reunion might very well end in the largest fight to date.

Apparently, everyone has at best one major grievance with someone else from the show. And because these people seem to lack a filter – their taking all of their drama directly to the stage. Though tonight, Stevie decided to quick off the drama early. Right before the show, he released an image of a scantily clad Althea, Benzino’s fiancée, on his Instagram page. So that was one everyone’s mind and the cameras hadn’t even officially started rolling by that point.

Thankfully, the host chose to address other issues prior to getting to the big Benzino/Stevie feud. Hence she turned the discussion towards Scrappy and his female troubles. Erica P. claims till this day that she was only ever Scrappy’s friend. And yet she also states that Scrappy didn’t come to defense because he was holding a grudge. Erica P. says Scrappy is just mad he never got a taste with her and she feels like both he and Bambi need to lay off trashing her. Or at the very most clear her name.

Meanwhile Erica D., who finds all of this amusing, couldn’t help but point out how angry Bambi was at the mere thought Scrappy was cheating on her when she was there helping Scrappy cheat on Erica back when they were together. So Erica doesn’t believe they truly love each other and she insinuates that Scrappy continues to sleep with her.

And in case anyone thought she was lying – she brought out a hotel bill!

But even then, Scrappy swears nothing sexual happened. That it was completely innocent. So Erica D. demanded a lie detector test and she was promised one. And as everyone waits for the testing and go on a commercial break – Scrappy tried to leave the studio. He actually took off his mike and was changing clothes in order to leave. However Mona Scott told him how that would look if he left right after someone claimed they slept together. Ergo he stayed put.

[9:03:45 PM] Kristine Francis: Then once that was side table – Rasheedah and Kurt finally got the chance to discuss the status of their marriage. The two of are going strong…for now. She seems to have forgiven him despite all that Kurt has done to both Rasheedah and her mother. And Kurt, like usual, appears to be barely apologetic.

The look on the audience faces said it all. They think Rasheedah is a good woman and that she deserves better.

Though no could entertain the audience like the one and only Karlie Redd. The highs and lows of her relationship with Young Joc were both funny and frightening for all men to hear. She talked about looking through his phone and wasn’t afraid to admit that she once struggled with Joc one night trying to destroy it. At the time she had a feeling he was cheating on her and so she made sure to prove it. But she also clearly states that she loved Joc. She did things for him that she never did with someone like Benzino.

And though his former sidepiece swears differently, Karlie states that she was most definitely still in a relationship with Joc when he went back to his realtor.

The lovely Sommore eventually came back to Scrappy’s lie detector test and the results are: he has been with Erica D. in the last month. So you would think Scrappy would fess up after that. Yet he didn’t. He says he has no memory of fooling around with Erica.

The show took a break from playing Maury and when they came back some tension from behind the scenes ended up exploding onto the stage. Benzino and Stevie were both angry with each other and what occurred next was truly always in the cards with this particular duo – a fight broke out and security had to be called in.

Stay tuned next week to see how the rest of cast reacted once fists began to fly!