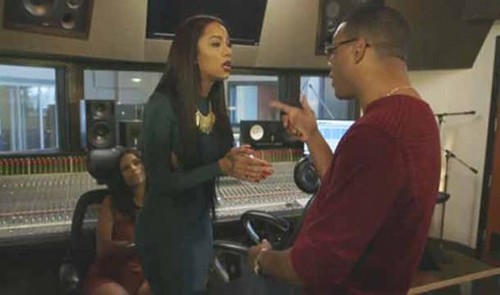 Tonight on VH1 LOVE & HIP HOP continues with a brand new episode called, “Love Is a Battlefield.”  On tonight’s show Destiny continues to interweave for Joe and Tahiry. Elsewhere, K. Michelle pressures Peter to reconnect with Amina; Saigon makes bold maneuvers; and love-triangle dramas escalate.  Did you watch last week’s show?  We did and we recapped it here for you.

On last week’s show a chance meeting between Tahiry and Joe threatened to rekindle their relationship. Buried emotions got the best of Erica Mena and Rich. New talent taught Yandy a tough lesson, while K.Michelle led Tara into a confrontation with Peter and Amina.

Amina considers the other night at the studio to be nothing more than a gigantic mess. She wanted to get perspective so she went to her friend Nicole. She wanted to hear a second opinion on things she’s thinking about doing. It seems after she found out Peter heated on her; she threw out her wedding ring. To be fair she was angry and drunk at the time. She’s at the stage where she doesn’t want to keep taking Peter back after he cheats, but she can’t imagine her life without him. She couldn’t answer the hard question on whether or not she’s willing to divorce. The only thing she’s firm on is that she doesn’t want him managing her career any more.

Everyone needs a friend willing to say what needs to be heard. For Tahiry it’s her sisters. She told them about Joe’s attempts at getting her back and she does miss him. Though her sisters don’t pull any punches. They remind her how ridiculous it would be to take him back. It isn’t as if he’ll suddenly change. Joe has a history. One is willing to repeat with Tahiry.

Peter may be losing his marriage but he doesn’t want to lose Tara. He called her up to chat recently after he found out the hard way she changed her locks. He s=tried to use his kids as an excuse and Tara won’t bite. She’s serious now. Unlike all the times before she doesn’t want to take him back. She wants to move on and he needs to get used to it.

Tara wants to do more in her life than wait for Peter. She gave up her acting career in order to start a family with Peter. Now is the time to focus on herself. She’s going back to acting and Yandy has helped out by giving her a part in a new movie. The part also offers up some eye candy. All the guy actors she’s around really help make her day.

Erica is meeting Rich to go over her new track. She brought along her girlfriend and before the official meeting she wanted to tell Cyn the truth. She didn’t think it was right for Cyn to meet Rich without knowing what happened. Erica told her she kissed Rich after getting caught up in a moment. Cyn is natural upset and doesn’t even have enough time to calm down. Rich entered the room within the next five minutes. He’s thinking they’re going to get to work and Cyn starts getting an attitude with him. She sarcastically asked “kissing my girl is work now?”

Cyn wants him to leave and it’s his studio. So they get into an argument with Erica jumping to put herself in the middle. She got Cyn to leave and she begged Rich to give her a minute. Erica tried to talk Cyn but her girlfriend didn’t want to hear it. She told Erica to go back to the studio. She was done. Erica does go back but it was to tell Rich he should have been more respectful towards Cyn. He can’t believe it. He was the one to tell her stop bring personal business into work. He doesn’t want her drama around. Either Erica hasn’t got it or she simply refuses to change.

Saigon asked Erica Jean to move in with him. He wasn’t romantic about it and it doesn’t seem like he wants to be romantic towards her. He wants to have full access to his son and so he came up with living together. This way he can also get to know the mother of his son.

Peter has lost both of the women in his life. Neither want to talk to him and he’s left with no choice. He goes to K. Michelle knowing she wasn’t a big fan of his. He wants to know what’s been going on with Tara. She doesn’t rat on her friend though. She tells Peter he needs to choose. Pick the woman he loves and stick with her.

Tahiry meets Joe for lunch. She said it doesn’t mean anything. She accepted the invitation because she wanted to be adult enough to be his friend. He wants to get back together while she wants to be able to move on. She does want him as a part of her life just not in the way he wants. Still he won’t give it up. Talking it out with his dad, he came to the conclusion that he needed to man up. It’s why he’s planning on proposing.

Peter has written off Tara. She won’t talk to him and has settled on being co-parents. It’s Amina that’s his musical soul mate (according to him).  He create a big gesture for her at their meeting and she couldn’t stop herself from getting all teary eyed. She’s missed him and they could start again. He does say he’s willing to get another apartment. That would help especially when Tara claimed she slept with him in Amina’s bed.

Erica wants to make it up to Cyn and she thought the best way to do it would be with jewelry. Cyn doesn’t want to be bribed. She’ll take the earrings but Erica needs to figure out what she wants. If it’s Cyn then she needs to rethink working with Rich. Concentrating back on her career, Erica is practicing for her performance but she made the mistake of not going through Rich. She went through another producer in finding a choreographer. Rich found out and he’s upset. Its one thing for her to start things at the recording session and it’s quite another to be playing around with his money.

This isn’t the first time she pulled a stunt like this and it won’t be the last. He had to tell her that he’s in charge. She needs to remember what went down after the last time and Erica needs to stop using Cyn as an excuse to be mad with Rich. They do have a signed contract.