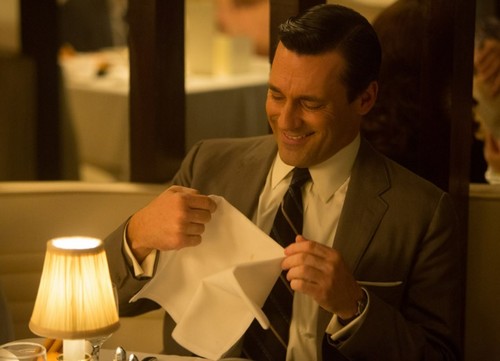 The series revolves around the conflicted world of Don Draper (Hamm), the biggest ad man (and ladies man) in the business, and his colleagues at the Sterling Cooper Draper Pryce Advertising Agency. As Don makes the plays in the boardroom and the bedroom, he struggles to stay a step ahead of the rapidly changing times and the young executives nipping at his heels. The series also depicts authentically the roles of men and women in this era while exploring the true human nature beneath the guise of 1960s traditional family values.

The final season will be split into two halves. The first seven episodes will air over the next two months while the final seven will air beginning in April 2015.

We will be blogging Mad Men Season 7 Premiere at 10PM EST . . . so make sure to come back to this spot and watch the show with us. Make sure to refresh often so you get the most current info! While you wait for the episode you can catch a sneak peek of tonight’s episode BELOW!

Recap: Freddy Rumsen is pitching Acutron watches to Peggy; she says it is a home run, really good. “Acutron, it is time for a conversation” Shirley comes in and tells Peggy it is five minutes until her next meeting. We now hear a phone ringing, Roger picks up, he is in bed naked with several women and it’s his daughter on the phone, she wants to meet with him.

Lou Avery, Peggy’s new boss is in a meeting with her and the team, Lou calls it a routine checkup. Joan is outside Ken’s office, she here’s him yelling and then he throws guys out of his office. Peggy is there to discuss Avon, Ken complains about Pete and Butler footwear. Ken directs Peggy to tell Butler that he is not available; says to make him go away. Then the phone rings, it is Bob Benson for Ken.

Lou wants to know if there is information about Chevy, there really isn’t much. Peggy notes that Lou didn’t pick an angle for Acutron. Peggy pitches, ‘it is a time for a conversation”, he tells her that he doesn’t care what she thinks.

Don is shaving, then he leaves. Don meets Megan and kisses her, tells her he likes the car she drove up in.

Back at the office, Peggy sees Ted outside her office and closes the screen so she doesn’t have to see him.

Don and Megan go to dinner, they meet with Alan, her manager. He tells Don that he felt it was important that he knew the man that his wife was spending a lot of time with. Furthermore, he mentions that Megan is going to kill it in California, she feels like she ate a bag of butterflies. Megan is shocked, she is getting work on NBC.

Joan is at a restaurant and meets with Ken’s client Wayne Barnes from Butler Footwear. He tells Joan that he wants to move all his companies advertising in house. She tells him that her companies’ relationship with his company is very important to them. Joan asks him to hold off on his recommendation at least for a few days.

Don and Megan arrive at her new place, he doesn’t like it very much and calls it Dracula’s castle. The two start making out, she claims to be a little dizzy and needs to walk around, all the while you can hear wolves howling in the background. Don brings Megan to bed, he tells her to rest. Megan tells Don not flick cigarettes off the balcony, it could cause a fire. Don heads into the living and watches TV.

The next morning, Megan wakes up and asks Don if he wants a life, he says no he will take a cab.

Peggy arrives at the office and goes in search of Stan, but finds Ted instead in the kitchen and we have an awkward moment between the two. Stan arrives in the kitchen, Ted leaves, he tells Peggy to buck up.

Don meets with Pete at a restaurant, he looks all preppy and tanned. After some idle chit chat, Don asks Pete where he is living, he says in a small apartment near the tar pits. Don tells him that he has been keeping busy, Pete tells him that he signed a fish & chip franchise and is surprised that Roger didn’t make an announcement in the NY office. Pete tells Don that last week he picked a Sunkist orange of the tree and couldn’t believe that Ted stayed in the car.

Pete brings Don to his apartment to show him around, there is a knock at the door; it is Bonnie Whiteside, a real estate agent. Bonnie hands Don and business car and Pete tells him not to get excited, she turns it on for everyone; Pete hugs her suggesting that is having a fling with her.

Joan goes to meet with a professor at the business school and talks about the Butler campaign, she tells him that their head of Marketing has an MBA and she needs to make an impact.

Don arrives back at the house, Megan is cooking dinner when someone else arrives at the door. A few guys arrive with a television, Don tells them to put it by the window. Megan looks clearly upset, she asks him why he did it, it’s huge. Don tells her that he bought it for her so she could see herself on color TV.

Peggy gets a knock at the door, a little boy named Julio tells her that she needs to go to their apartment to help unclog the toilet. Peggy gets a plunger and tells him to go away.

Don reminds Megan that they still have not celebrated, meaning making out. Megan goes to brush her teeth and crawls into bed with him; she turns out the lights. After a minute or two, Don realizes that Megan really isn’t into it. Megan tells him that she is nervous, about everything, he tells her not to be and continues.

The next morning, Megan is naked cuddled with Don when they wake up.

Roger meets his daughter for lunch, he tells her he is nervous after being summoned. She tells him that she forgives him for everything, for leaving her mother, for everything. She goes on to say that anger can be relinquished with love. Roger doesn’t buy it, he feels like she wants something, she claims she wants nothing.

Don gets on his flight back home when an attractive woman sits beside him; she asks if he wants a sleeping pill, he says no and she says her either. They start talking, he says he usually sits beside a man with a hairpiece eating a banana. After a while, they start to get comfortable to fall asleep on the plane, she tells him this is nice, she usually sleeps alone. Don notices her ring and finds out that her significant other passed away and she just went to California to shed his ashes. In the morning, Don finds the woman cuddled on his shoulder, she tells him that if she was his wife, she wouldn’t like this. Don tells her that his wife knows that he is a terrible husband, but she doesn’t know much. She tells Don to keep it that way, if she doesn’t know. She tells Don she could make him feel better, she has a car waiting for her and she could give him a lift. Don says he has to return to work, then opens up the window blind and lets the sun in.

Roger arrives home, he just wants to get some sleep.

Peggy gets to work, Lou arrives just after her and tells him she is sorry for what she suggested; she should have told him about Freddy’s original idea, “Acutron, it’s not a time piece, its a conversation piece”. Lou says he already made his choice and will not be influenced by Peggy’s charm.

Joan arrives in the office and finds out that Wayne Barnes from Butler Footwear made an appointment; she calls him and threatens that if they do in house advertising, they will compete with SC&P and it won’t go well for them. Joan convinces him to agree that the meeting is cancelled.

Stan goes into Peggy’s office and tells her that it is time to give up on Acutron, Lou made a decision; Peggy doesn’t want to let it go, she still wants to try and convince him to go with Freddy’s better pitch.

Don is at home, Freddy arrives with some drinks and lunch, tells him about the work on Acutron.

Joan is talking to Ken, he knows she was in his office and tells her to stay out of it in the future.

Peggy arrives home, once she is alone, she falls to the floor and starts crying. Then we see Don watching TV and clearly feeling good after a couple of drinks. Don tries to close the balcony door and when it won’t close, he goes out there and just sits down clearly as shaken as Peggy for different reasons.