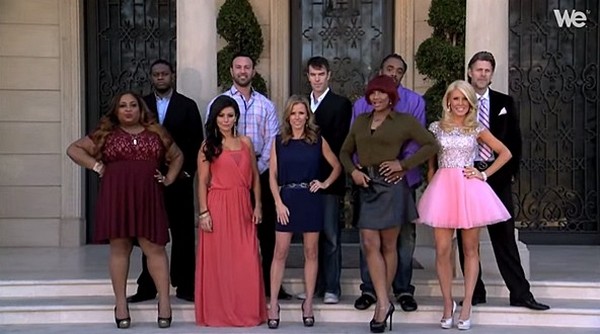 Tonight on WeTV their new drama Marriage Boot Camp: Reality Stars airs with another new episode. On tonight’s episode called, “Fate Comes Knocking,”  the next drill will bring them face to face with some tough decisions, they’re going to push them.

On the last episode the stars divulged their sexual desires. Chaos erupted when JWoww’s secret was leaked to the press. Roger destroyed property in a fit of rage. Clive leaved Tanisha hanging, while a couple bolted from the mansion. Did you watch the last episode? If you missed it we have a full and detailed recap, right here for you.

On tonight’s episode the couples will be pushed to their limits, they will need to make a tough decision that’ll change everything for them. A couple get into a fight and it looks like it’s not going to end well for them.

Tanisha recently received some happy news and yet she’d rather celebrate said news with anyone else besides her husband. She’s been burned way too many times by him – so she doesn’t want him to ruin her mood now. Clive doesn’t seem to appreciate her latest successes. He always wants to demean it because he believes his wife changed when her career took off.

So he like the other couples will have to face an exercise. The first exercise the directors gave them for the day was making them release any resentment they might have held on. Whether or not it was towards their spouse or someone else.

But when Slade’s turn came around – all he could feel was pain about his son. His son is thirteen and when he was five he was diagnosed with brain cancer and so after years of surgeries his son landed in the ICU. And Slade is still hurting from that. How could he not be? He wants to know why his son. Especially as it feels like he’s being punished by watching his only child go through so much.

Tanisha also had to face some inner demons. She had to let out her anger at the caretaker that allowed her to be hurt when she was a child and at first she couldn’t do it. She didn’t want to hurt the lady that was acting as stand in. So Jim chose to be a stand-in and though it took everything Tanisha had – she had to forgive that woman.

Several times Tanisha tried to quit, but the directors made her stay. They knew she needed this probably more than everybody else. Hence Tanisha stayed till she was able to forgive a woman that hurt her.

However she’s not all that forgiving with her husband, Clive. Once the rest of them had their turn venting and forgiving – Clive went up and chose his wife as the person he most resented. He was angry at her for not respecting him and showing a complete disregard of his feelings. And while Tanisha was watching someone portray herself – she noticed some things she didn’t like about her own behavior. Though that didn’t change the fact she was angry at Clive.

After he vented at “her”, she wondered if their marriage was even still worth it. Tanisha was so worried she actually went to Slade for advice and he told her (if she was his daughter) then he would tell her to leave Clive. Tanisha has picked up on a change in his tone with her yet she was the one that told him to speak up so that’s exactly what he’s been doing. He made it known to her that he wasn’t happy and he was tired of fighting with her.

The second exercise was harder than the first. The directors had each couple stand outside of two doors. Each of the doors was a choice between their loved one and something else. Gretchen chose motherhood over Slade. She knew she couldn’t go through life without it. Sadly for her, Slade didn’t choose that same door. He chose to heal himself over her.

Traci had to choose between Kevin and her sister. She was told she had to put one of them first and so she picked her husband. And her husband met from the other side when he chose to put her career above himself. They were both selfless.

Ryan and Trista both were asked the same thing. They had to pick which Ryan they wanted. The one he is now or the one Trista wants him to be. They both picked the Ryan his wife wants him to be so they didn’t meet in the middle. Ryan was selfless and Trista was selfish. She didn’t make him believe that he was good enough as he is.

There were no evaluations at the end of the exercise. Frankly by this point, the directors knew the cast would have a lot to say to each other without anyone else’s input.

Tanisha and Clive had it out and instead of just sitting there – Clive finally spoke up for himself. It caused a big argument between him and his wife. Then she had started to complain of chest pains and Ryan had to come assist her because she thought she was having a heart attack.

Tanisha was rushed to the hospital at the end of the episode!