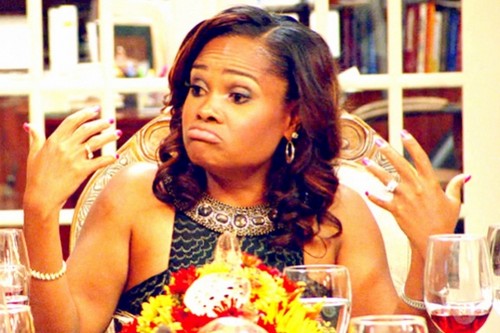 Tonight on Bravo, Married to Medicine returns with an all new episode called, “Guess Who’s Not Coming for Dinner?” On tonight’s episode, Simone tests Jackie’s mothering skills. Meanwhile, Toya scouts for a house; and Heavenly hosts a dinner party, where fallout from Mariah and Quad’s catwalk showdown destroys alliances and divides the group.

On last week’s episode Dr. Simone finally revealed her financial issues to a shocked and speechless Dr. Jackie. Meanwhile, Dr. Heavenly heard some startling information about Mariah. An explosion erupted at the Women of Atlanta fashion show when Reco Chapple and Mariah finally came face to face.  Did you watch last week’s episode?  If you missed it we have a full and detailed recap, right here for you.

On tonight’s episode when Heavenly invites the ladies over for a dinner party, long-standing alliances are shattered as the ladies deal with the aftermath of Mariah and Quad’s catwalk cat fight and are forced to choose sides.

Tonight’s episode begins with Quad and Mariah at it again after the fashion show. While they were airing their issues somewhat civilly at first, it soon got heated again after Quad began taking it to the next level with the emotions. Mariah began to leave and Quad kept yelling as friends crowded around her and told her to stop and calm down. It didn’t seem to work well, but Mariah headed out anyway.

The next morning, Dr. Heavenly came over to Mariah’s to see Dr. Aydin, bringing him some “get well soon” balloons. He suffered a bad reaction to medication after having a procedure done in an effort to keep looking good for wife Mariah. He was still swollen and sore but showed Heavenly his stitches from the procedure he had done to get back a full head of hair and recapture his youth. Later, Miss Lucy, Heavenly, and Mariah talk about what happened with Rico. Heavenly tries to clarify what was actually said about “making Quad”… the comment that keeps coming back to bite Mariah. Mariah clarifies that she didn’t tell Quad that she made her,” but that she provided a platform for her to become famous. Given that Mariah produces the show and brought in the original cast, sounds like a fair statement. Heavenly doesn’t necessarily agree and thinks Mariah’s comments were not “God-like.” Mariah also clarifies that she was not upset with Quad about participating in Rico’s photo shoot.

Meanwhile, Quad and her hubby talk about what happened with Mariah the night before and how she might handle her frenemy in the future. Later, Simone brings Jackie a crying baby. The baby’s not real, but it will prove to be good practice for wanna0be mom Simone. Jackie is excited to prove that she can handle all that comes with a baby, while Simone seems a little skeptical when she reminds Jackie that the job is 24-7. Jackie seems up for it. This should be fun!

Quad is fawning over her body while she attempts to work out at home with her little dogs. Her workout is interrupted when Heavenly calls to invite her to a dinner party. She gives her the guest list, that does not include Mariah, and shares that it will be an intimate affair at her house where the topic of discussion will be “relationships.” Quad immediately thinks this is funny…Heavenly talking about happy relationships. She says she cannot wait for this party!

Dr. Jackie leaves after a very long shift at the hospital and wonders how she’d handle a baby at the moment when she gets off this hours-long shift where she is so exhausted. She wonders how she’s handle a baby at times like this. Just as she begins driving off, her pretend baby “Jackson” in the backseat begins to cry and reminds her how difficult it might be if she did have a real baby now.

Toya and Eugene talk about their desire to move. That desire turned to urgency after they recently found out there was an armed robbery right around the corner from their house. Meanwhile, Heavenly is sampling the food for her party as she waits for her guests. She is under the assumption that all these ladies can use her expert advice about relationships. Toya arrives first, then Quad. Lisa Nicole, Jackie, and Simone arrive and the ladies sit down to eat. After the ladies thank Heavenly for hosting this dinner, Lisa Nicole asks whether or not Mariah will be there, Heavenly explains her decision to keep her off the guest list for this time. Moments later, she drops the ball without the slightest attempt to sugarcoat any part of her hidden agenda. She goes right in telling the ladies that the reason for the dinner is for her to offer marital advice because from what she’s seen, they may be in a need of some guidance. She explains in the shadiest way possible, “There are some women who may be spending all their husband’s money, some that may have trouble admitting things to their husbands,” and she goes on as the ladies look on in disbelief. Heavenly then asks the girls for their thoughts on the men being the head of the household. The women get more and more irritated by Heavenly’s opinions. Heavenly then goes in for the kill and calls out Toya about issues on her house closing…going into no-no territory by talking money. The ladies are upset over this and Quad comes to Toya’s defense. Toya tells Heavenly exactly what she should have…it is none of her business.

Simone brings up the group all taking a nice trip together with the husbands. Of course, Quad brings up Mariah and the fact that she won’t participate if Mariah is included. The dramatic emotion with tears starts as she talks (again) about how hurt she is, etc. Simone goes off on her basically telling her she needs to move on and get over it because she cannot keep going on like this forever as she walks out of the room.

Toya asks why Simone is so upset over the issue. She explains her long friendship with Mariah and how much respect she has for her. Toya tells her to remember the fact that Mariah has hurt everyone at the table at some point. They all calm down and plan to move forward with planning the trip. While the verdict is looking like Mariah will not be included, things may change as Simone is really hoping she’ll be included. The night ends with the ladies leaving from their uncomfortable dinner party.

See you right here next week as we recap another episode of M2M. Next week, Heavenly will be at it again stirring the pot as usual!