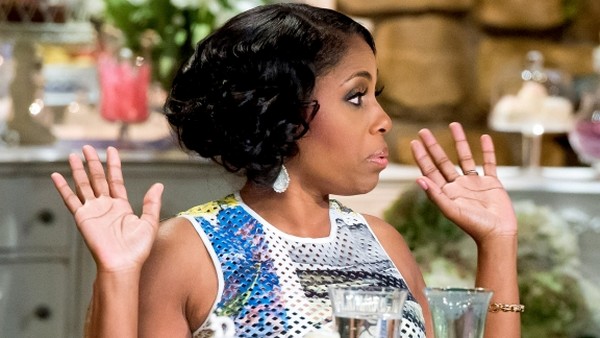 On the last episode host Andy Cohen reflected on some of the season’s most talked about moments, as the MDs and Mrs. MDs came together in part one of the explosive Married to Medicine reunion. Mariah and Quad finally came face to face to reveal the truth about what really went down between them; Heavenly heard from the ladies on what they really think of her; Simone and Toya’s disagreement on stage spilled over to backstage, putting the rest of the Reunion in jeopardy. Did you watch the last episode? If you missed it we have a full and detailed recap, right here for you.

On tonight’s episode now it’s time for the second part of the Married to Medicine cast reunion with Host Andy Cohen continues on reflecting on some of the season’s most talked about moments, as the MDs and Mrs. MDs come together and continue to clash.

The ladies from Married to Medicine are back for part two of the reunion. During the break however there was a scuffle between Simone and Toya. Neither wants to assume blame for what happened so they chose to try and fight again – this time though with their words seeing as Andy warned them to not get up out of their seat. He’s already enough of that with Porsha and Kenya.

Luckily, the fight was over quick and Andy managed to regain control of the sit-down, but there were still moments of tension between the two ladies. He had turned the discussion towards the ladies and their husbands. A lot of what happened this season either involved or affected the husbands so it was best they came out onstage and answer some of the questions themselves.

Toya’s, Quad’s, and Lisa Nicole’s husband all came out. Toya’s husband needed to explain how he was able to lose fifty grand so easily. Because everyone (most especially Heavenly) couldn’t understand how he could lose so much and treat it as a joke. So he explained the government shut-down had a part to play and even though it looked like he wasn’t treating the loss seriously what with taking a vacation right after – he was upset.

Though no one should forget he’s also a doctor. Losing that much – while embarrassing – isn’t going to break the bank for him.

Then there was a question for Quad. People wanted to know when she was going to give her husband a baby. And Quad said she did want a baby…one day and she couldn’t think of a better father for her future husband than her husband. But currently she’s not taking any birth control. She’s chosen to work around her ovulation cycle yet her husband also notes that when she’s not ovulating – she remains timid with him. As in she fears he’ll try to get her pregnant.

Lisa Nicole’s husband was in the middle of discussing his past and many indiscretions when Simone demanded a break. She was crying onstage and she needed a minute to compose herself.

Simone later called it a meltdown. She couldn’t explain why she had it and when Toya tried (in her own way) to apologize for her part in the turmoil it started up their fight again. They both were angry at each other and so it all developed into a screaming match. And Heavenly, for one, was tired of it. She’s sick of all the drama and thinks it’s funny that she’s known as the crazy person when it’s the other ladies that go looking for fights.

Maybe she doesn’t know what show she’s on!

This season was filled of arguments and drama. It seemed like everyone was mad at Mariah. That is except for Simone. Simone kind of rode the fence in many of the arguments involving Mariah and nearly everyone else. She and Mariah have been close friends for years and that was never put in jeopardy. Though Quad was angry at Simone for trying to force a reconciliation between herself and Mariah. If Quad could respect Simone enough to not bring her around Toya – she wondered why Simone couldn’t do the same for her.

They all had great admiration for each other in the beginning. So to see how it all ended is really sad. Quad and Mariah both miss each other very much to this day. Yet they haven’t rebuilt any bridges. They just left off at angry and don’t know how to move on. Like one of the husbands said – the ladies are unable to get over their problems because none of them ever wants to take the next step. They merely want to stop at “I’m sorry” without doing the extra work.

But there is a part three to this reunion and so there is still a chance some kind of progress can be made with the ladies!