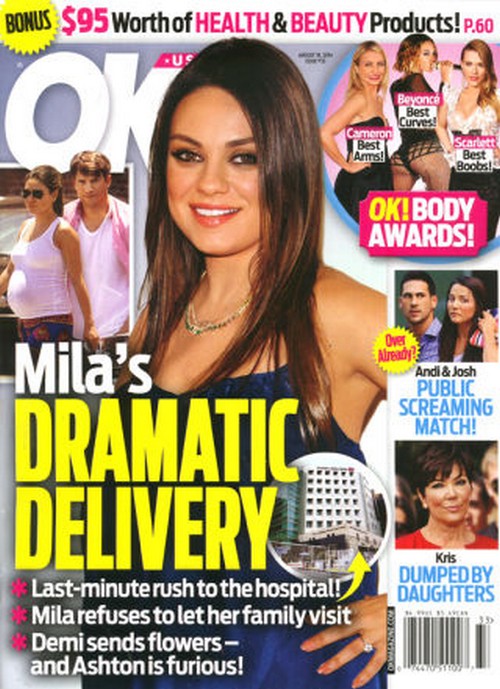 Mila Kunis and Ashton Kutcher are reportedly panicking on the eve of Mila giving birth. Mila reportedly had an issue with cramping and was rushed to the hospital, which set both her and Ashton on edge as they wait for the baby to arrive.

According to OK! Magazine’s cover issue, Mila is pregnant, panicking, and about to break down from all the stress. And to make matters worse, Ashton is reportedly furious because Demi Moore sent them flowers. Uh, is he mad because his ex-wife wishes them well? Would he rather she sent Mila a bunch of poisoned apples? I’m confused.

OK! also has a feature on Andi Dorfman‘s and Josh Murray‘s ‘public screaming match’, i.e. the beginning of the end, as I like to call it. Nobody expects Andi and Josh to last past the next few months, or at most, the next year. Their relationship had an expiration date the minute they met on the Bachelorette, and they’ll be keeping to that expiration, trust me. They’re already fighting over the most ridiculous things, and they’re not even married yet.

Finally, OK’s cover also has a story about how Kris Jenner has been ‘dumped’ by her daughters. I ask, what took them so long? Kris has been using and manipulating her daughters for the better part of a decade, and at this point, they hold more sway than she does. They can easily gang up on her if they wanted to, and it looks like they finally got the guts to cut off mommy dearest. Of course, they’ll now have to suffer the consequences, but good on them for standing up to her for once.