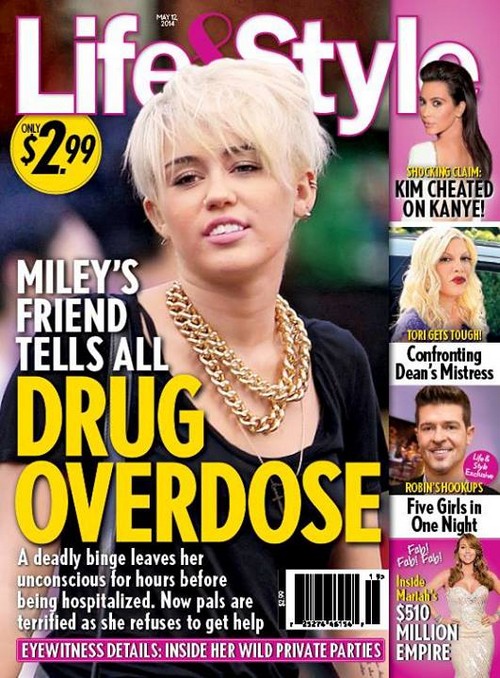 I think you’d be hard pressed to find very many people that believe that Miley Cyrus’ hospital stay was primarily due to an allergic reaction nearly 2 weeks ago. A bad allergic reaction doesn’t keep you stuck in a hospital bed for ten days but an overdose might. Miley has become notorious for her hard partying and promotion of hard drugs (Molly) – she simply doesn’t care what happens after the fact. According to the May 12th print edition of Life & Style magazine Miley actually suffered an overdose and was unconscious for hours before she was found by friends.

That nifty hospitalization was more like a mandatory detox for the troubled young star. She obviously had a really close call but the question now is whether or not Miley will learn from it and slow down her partying. Her friends have opted to speak up because Miley seems to glorify all of her drug use but there is this other often fatal side and it’s important that her fans also realize that there is a lot of risk involved when getting high or popping pills.

Did Kim Kardashian already cheat on Kanye West? Would anyone really be surprised if she did? Life & style has stumbled onto a source that claims it happened and they are dishing all of the inside details.

Speaking of messed up relationships, Robin Thicke doesn’t seem to be working over time to win estranged wife Paula Patton back. Instead he is rumored to have juggled five women in one night! Can you see him being down for that? And how about Miley, do you believe that she really did OD? Tell us your thoughts in the comments below!