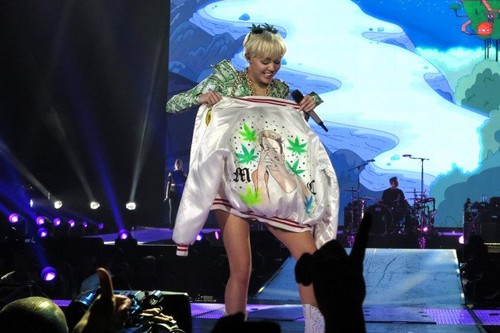 Miley Cyrus went from Hannah Montana to controversial sex symbol and all-round Dementor within a matter of years. She twerked, sat naked on a wrecking ball and turned into Hollywood’s nipple-exposing-bad-girl-wunderkind. The sudden metamorphosis had a positive, watershed influence on pop culture.

Cyrus is without a doubt the hottest pop star of the year.

All the mumbo-jumbo aside, Cyrus still lacks basic class. There’s nothing wrong with celebrating one’s own body and beauty, but the clichéd naivety stops after the 100th nipple. Cyrus is a strong supporter of the Free the Nipple Campaign. This anti-censorship movement aims to “decriminalize the female body” and to “protest the backwards censorship laws in the US.”

Cyrus posted a photo on Instagram over the weekend which left “little to the imagination”. The image, titled “preshoweralfalfaselfielife”, was quickly followed up by a post-shower, underwear-selfie.

Nipples McGee also left “little to the imagination” when she bashed Selena Gomez on stage recently. She allegedly (pics here) “throttled a small cardboard cut-out that was confirmed by concert-goers to be made in the likeness of Selena Gomez.” Nipples McVoodoo then “angrily [hurled] the Selena doll” into the crowd. During this gratuitous display of doll violence, Gomez allegedly lost her toe in a boxing match with two sad people wearing lip gloss and tears.

Hannah “Demon” Montana is sharpening her claws and preparing for her next attack. Hopefully she doesn’t hurl a Celeb Dirty Laundry voodoo doll into an audience, because I really can’t afford to lose my toes.

My sneakers just won’t be the same without them.

What do you think about Cyrus’ transformation? Is she hiding her dancing voodoo dolls in a dungeon? Are you a fan of her music? Is she trying too hard? Let us know your thoughts in the comments below.