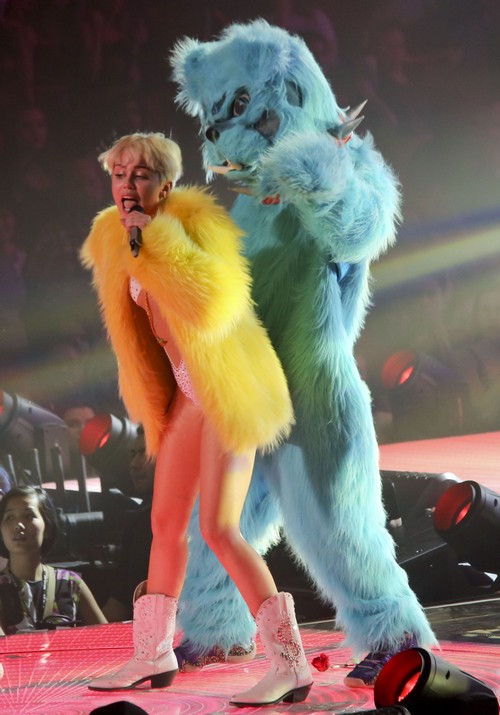 Despite Miley Cyrus’ belief that she could rely on ultra-raunchiness for the success of her Bangerz tour, she is now finding out the hard way that she should have brought some talent to the stage, instead.

In Miley’s desperate attempt for attention, we have seen her get nastier and nastier by the day. To Miley, getting such attention is just the high she needs, when she’s not high on the other stuff. The downhill decline has been a long time coming, with the pace quickly speeding up after her break up with former fiancé Liam Hemsworth.

She is so tragically insecure, that she has resorted to sticking her tongue out in pictures, chopping her hair off, and wearing next to nothing because she doesn’t feel she can compete with other young celebs, some of whom actually have talent. Miley doesn’t see herself as a pretty girl, so she does not want to be pictured smiling next to some glamorous young celeb where they can be compared. By acting wild and crazy, she is trying to make her own category in the industry; one where she is not on the same playing field as other young musicians and actresses.

Now, her raunchiness is finally slapping her in the face as fans began walking out on her Vancouver, Canada concert last week and many others are appealing to her record label to cancel the tour altogether. What Miley thought of as “being edgy,” others are seeing as disgusting and unnecessary.

Her management team has been flooded with calls, some from parents, and some from the twerking star’s fans. Sounds like no big deal, right? Her record label and management team wouldn’t care about a few angry fans, right? Wrong. You see, it is not about the angry fans calling in to complain after seeing horrific things in her show such as her putting a fan’s thong in her mouth, dancing along with giant joints, riding on to the stage on a giant hotdog, and basically masturbating for all to see. Nope, it is not that that has her team concerned. Celebuzz reports that, “Her team, including management, record label exes and the entire tour staff including the director, costume department and choreographers – have been called for an emergency meeting as arenas across the U.S. threaten to pull out of the show.”

For those who already bought tickets, and have decided against going to what has been described as a porn show by those who have attended, the only option is to sell their tickets. Both eBay and Stubhub are hawking tickets to one of the most disgusting shows for anyone who’d still pay to go. I wouldn’t be surprised if Tish and Billy Ray try to dump their tickets as well. What parent could stomach to see their child’s ass twerking in their faces? Well on second thought Miley’s parents might think this is great – after all they did raise this creature and you know what they say about apples not falling from from trees. Ugh. For those of you who have not already thrown up in your mouth after picturing that, we warn you not to look at any tour pics or you will surely become ill.