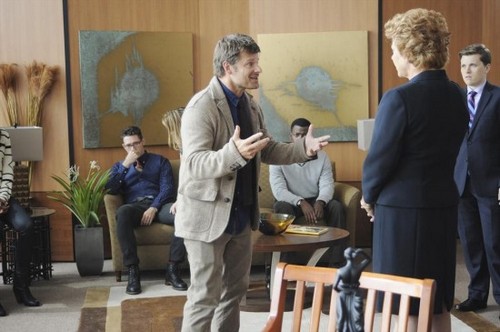 Tonight on ABC their new show MIND GAMES continues with another new episode, “Asymmetric Dominance.”  On tonight’s episode the team help an executive after she’s unfairly overlooked for a promotion. Meanwhile, Ross tries to uncover Beth’s true intentions.  Did you watch last week’s pilot episode?  We did and we recapped it right here, for you.

On last week’s episode Clark, an expert in human behavior, and his brother Ross, a former con-artist recently out of prison, opened a unique agency where they used psychological manipulation to help solve their client’s problems. In their first case, they attempted to help a mother whose young son was suffering from a heart condition by convincing the health insurance company’s head of claims to approve a previously denied experimental treatment.

On tonight’s episode the team is hired by an executive at a consulting firm who’s been overlooked for a promotion she’s next in line for in place of a younger male candidate with less experience. Meanwhile, Ross is worried that Beth can’t keep their secret from the past and hires a con-woman pal to find out Beth’s real intentions with Clark. Later, Ross tries to call a truce with Claire but she still doesn’t trust his motives.

Tonight’s Season 1 episode 2 of Mind Games looks like it is going to be great and you won’t want to miss it, so be sure to tune in for our live coverage of Mind Games at 10:00 PM EST! While you wait for our recap hit the comments and let us know how excited you are about the new season of Mind Games?

RECAP: We now see some sort of commercial about Clark saying he can convince anyone to believe in what you want; Ross made it and Clark isn’t pleased. Clark says they bought some expensive stuff and now this commercial is more like they are seeing power crystals; Ross says he is running the commercials at night time and Clark hates that it refers to him as Dr. Clark. A person comes in saying he saw the add and is looking for Dr. Clark; his boss Kathy is like a mother and she will do anything for the company and was next to be CEO. Though some guy named Trent came instead and the company feels that he is a younger presence. The man says he wants Clark to help make it that they decide to take Kathy over the younger man; since she has more experience. Ross then says that they have a job after his add, Claire tells Ross to go tell Clark that Beth is there to see him; Ross says that he wants to see Beth alone now. Beth mentions that she fell in love with Clark and Ross says that she will never pull it off with him; Clark decides to go out on lunch with Beth. Ross says he needs him to stay and wait for the call from Chris to meet with Kathy; Clark tells him to stop being a parole officer since he has one and Ross tells Clark to stop being a child because his girlfriend is one.

Miles says they have to leave or they are late; Ross says they need to hurry up and Clark comes out saying he is sorry about how he acted before. Clark says the business is important but hopes Ross can accept Beth since she is in his life; Ross is confused and asks how Claire did it. Claire says that she just knows hot to deal with him more; Chris brings the team with him and they meet Kathy. Kathy says she is upset since the last person in charge was two years older than her when he got the job, she says that it’s disappointing now her age is a problem. Clark says to Kathy that she doesn’t understand how decisions are made; he tells her that he can make her win. Kathy says she would love to win because she hates losing since the other guy isn’t better, they ask Kathy which of three pictures is better; Kathy says the middle. Clark says they are going to add a third decoy candidate to be in the poll as well and in comparison she will be better; Claire brings a bunch of people from her work place that could run. Kathy says it’s crazy; Trent walks in and makes a joke out of Kathy and her age. Kathy says that she will choose a guy named Jim who she thinks is someone perfect. Beth is outside and is approached by a lawyer about her relationship with Clark wanting to talk about it.

The lawyer says that Beth has been scarred and that she should sue for money against the university and needs to take action since she was wronged; Beth mentions she is with Clark now and the lawyer says that she needs to split off with him. She says when that happens she can come back to her. Clark and the group are there and tells Megan to go and make her move; she goes and talks to a person form the board about who they will be taking on as CEO. Megan says that a rumor mentions Jim being a perfect option for the job; the guy doesn’t get it and when told that he says he never knew that and she tells him how other companies want him so they made it as if he would be over looked. Ross meets with Jim; Miles and Latrell are talking about how great Jim is and that Ross is some sort of executive. Clark starts freaking out and is thrown out of the party; Ross is upset with him and Kathy says it was impressive. Kathy says that she trusted Clark and made her regret it completely.

A person comes in looking for Ross and he invites her in; the lawyer girl came in and he paid her to meet with him. The person says she was willing to sue her instead of Clark, Ross says it is great and then she asks if it is possible to work with them; Miles comes in and says that Jim has been approved for interview for CEO. Ross comes in and tells Clark the good news; Clark is depressed because he almost blew it completely. Clark says that he can’t be responsible for other peoples lives; Ross tells him that who he is makes everything possible. Ross says that he can help Clark fix himself better, but to not to let it get him down. Clark asks to go out and eat; though Ross says he has cleaning to do. Ross tells Beth what happened with the lawyer was because he needed to know if she was truly in it for Clark; Ross says that they need to fix Beth’s story. Ross tells Beth her will teach her how to lie but it may never end well; though he knows that she will have to make everyone love and trust who she is. Clark comes to visit Beth and notices Ross is there; Clark asked what they are doing. Ross says they got off at the wrong foot but wanted to fix things between them, Clark comes to see Ross and says it means a lot to him; Ross gets a text saying Jim was turned down for CEO

It’s said that Jim decided he thinks he has no chance of winning the poll to be CEO; Ross says they need to dumb him down and Clark thinks it is smart. Ross gets his fake lawyer Samantha to go ahead helping out with convincing Jim to believe he can be CEO; Clark tells her that she basically needs to sexually appeal to him. It’s to help Jim feel compelled to make him want to be the CEO; Samantha mentions that she needs to rhyme so that it makes him feel more confident with taking on such a big job. Jim mentions how he knows he would never be taken on for the job; Samantha says that she knows he can’t win but it doesn’t matter. But it will make him feel more confident and she can make sure he gets a 30% bump for just being in the running. Samantha says that Jim wasn’t taking the bait, though convinced him to instead take it and fail. Ross is writing her a check and Samantha says that she is trying her best to stay good; she gets a call from Jim saying that he wants the interview.

Miles comes in saying that Kathy got the job; the whole group meets with Kathy and she thanks them. Apparently Jim is being let go from the company because now because they found some things that is wrong with his lie with having no degree; Ross tells her she is the new CEO and should stand up for Jim. Kathy goes to her meeting; after that she was fired since she said she was leaving if Jim was too. Kathy says she feels good about it; she is now got an offer to run a company with Jim. The group goes out drinking for their accomplishment; at the bar Claire apologizes to Ross for doubting him. After some girl who knows Beth says she remembers him from somewhere and Claire now believes he’s still a liar; Claire tells Ross to make something up like he usually does for everyone else since she is leaving.