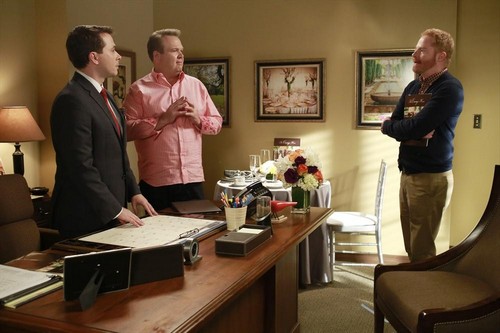 Tonight is ABC’s hit show Modern Family  continues with another new episode called “And One to Grow On.”    On tonight’s show things get real when Phil finds himself in a jail cell and Mitchell and Cameron fight to secure a wedding venue.  Did you watch the last episode?  We did and we recapped it right here for you.

On the last episode with a big football game coming up and a record to break, Coach Cam was intensely focused and showing no mercy even when the opposing team was playing with an unexpected disadvantage. Elsewhere, Claire was determined to prove to the staff that she was more than just the boss’s daughter, and Phil tried to teach his kids a lesson about optimism, but the universe just wasn’t cooperating.

On tonight’s show Phil tricks Luke into taking a dance class, but the jokes on him when the white lie indirectly lands him in the slammer. Meanwhile, Jay and Gloria are throwing birthday parties for both Manny and Joe and are concerned Manny might be going for girls out of his league, and Mitch and Cam get a rude awakening in the cutthroat world of booking a wedding venue.

Here is the recap!

Modern Family “And One To Grow On” opens with Phil, Claire, and Luke eating breakfast. Luke is excited because he is going to autopsy camp. Phil lied to him though, he is actually taking him to a ball-room dancing class, there is no such thing as autopsy camp. Alex wants her Mom to take her driving. Claire lies and says she has a meeting, but really she hates driving with Alex. She drives so slow, Claire is the “only parent who has to step on the imaginary gas pedal.” Haley agrees to take Alex driving, and Claire pays her for her troubles, but makes her swear to never tell Alex how much she hates driving with her. Phil is dropping Luke off at ballroom dancing class, and Luke is not happy when he realizes ballroom dancing class is not autopsy camp.

At the Pritchett house Jay and Gloria are taking down the decorations from Manny’s birthday party, and getting ready for their baby’s birthday party. Jay wants to recycle the balloons and leftover cake, but Gloria isn’t having it. She doesn’t think it is fair for her sons to have to share birthday parties. Manny is excited because the head-cheerleader Amy Martin left her coat at his party. He thinks he has a chance with her, but Joe says she is out of his league.

Cam and Mitchell are at their potential wedding venue, Cam is ready to sign the contract but Mitchell thinks the deposit is too large and they can find better prices somewhere else. While they are outside arguing about whether or not to book the venue, one of Cam’s students call and book their Sweet 16 Party on the date they wanted. Cam has a plan though.

Phil is picking Luke up from ballroom dancing class. Luke isn’t happy, he had to dance with “20 of the geekiest girls.” While they are arguing about whether he is going back to ballroom dancing, a police officer pulls him over for a busted taillight. The officer checks Phil’s license and then arrests him, he has over 20 unpaid parking tickets accrued on his car, they are Haley’s. Phil calls Claire and tells her to come bail him out of jail, they won’t let him leave until he pays the $1600.00 worth of parking tickets. Claire can’t get that kind of money because it is Sunday, and the bank is closed. Phil tells her to use his “emergency stash” and hangs up. The thing is, Claire has no idea where his emergency stash is. He uses a code to lead him to the hiding place, and he moves it every month. Meanwhile Luke is in the waiting room hanging out with the cops that arrested his Dad.

Cam is scheming, he is trying to get Tracy and Sophia (his students) to give up the wedding venue, they booked it for a joint Sweet 16 Party.

Baby Joe calls his Manny Andy “Dada.” Jay says he is fine, but he looks a little bothered. Meanwhile Gloria is upstairs trying to talk to Manny about his crush on the head-cheerleader. He has filled all of her coat pockets (that she forgot at his party) with the favorite things she had listed on her Facebook page (lipgloss, bath salts, candles, etc.)

Jay sneaks into Baby Joe’s room and tries to get him to say “Daddy.” Baby Joe just screams at him.

Cam and Mitchell are at the mall hanging out with Sophia and Tracy. They are trying to desperately to convince their girls to have their party at another venue. So far, no luck. Cam blames Mitchell, if he hadn’t worried about the cost of the venue and just signed the contract, then they wouldn’t have lot it to the Sweet 16 Party.

Gloria and Jay are getting ready for Baby Joe’s party, the guests are arriving. Apparently Claire finally found the cash and got Phil out of jail, they arrive first, followed by their unhappy kids. Luke is still upset about ballroom dancing, and Alex is not happy that her Mom has been paying her sister to drive with her. Haley gives Luke and Haley a magical speech about how much their parents love them, and how they lied to help them.

Jay is meddling in Manny’s love life. Amy is on her way to get her coat. Jay is trying to warn Manny that she may not be into him, he is scared he is going to get hurt when Amy rejects his “coat surprise.”

While everyone is arguing about whether or not Manny should go for Amy, Baby Joe says “Jay.” Jay is ecstatic, the doorbell rings, he gives Manny his blessing and wishes him luck with Amy. Manny heads outside to give her back her coat.