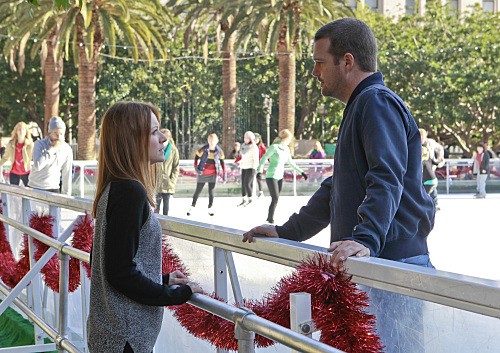 Tonight on CBS NCIS: Los Angeles continues with an all new Monday December 15, season 6 episode 11 called, “Humbug,” and we have your weekly recap below. On tonight’s episode, a burglary occurs at a cyber-security company, but Callen [Chris O’Donnell] is forced to steer clear of the investigation when Hetty [Linda Hunt] tells him that his girlfriend, Joelle, is one of the lead witnesses. Meanwhile, the team discuss their personal holiday travel plans.

On the last episode, Sam reflected on his own upbringing and relationship with his father when the team investigated the murders of marines who have sons in military academies. Did you watch the last episode? If you missed it, we have a full and detailed recap right here for you.

On tonight’s episode as per the CBS synopsis, “The team investigates a burglary at a cyber-security company, but Callen must steer clear of the crime scene after Hetty reveals his girlfriend, Joelle, is one of the lead witnesses. Also, the team discusses their personal holiday travel plans.”

A burglary was brought to the team’s attention after it not only happened around the holidays but the fact the potential contents of the robbery could have dire consequences if it got into the wrong hands. The thieves had broken into a cyber-security company that specializes in building firewalls against harmful malwares. And that particular company actually creates some of the anti-viruses the Department of Defense uses.

Hence this case is more than just a little important. If the thieves had ended up making off with their goods – the entire department would have been at risk.

But luckily they did not. Though they did nearly risk Callen’s cover. Callen has been seeing a woman named Joelle and she was taken hostage by one of thieves when they tried to make their last stand. Fortunately Joelle is fine now. And she was only shaken a bit by what happened.

Callen on the other hand seems to be more worried than she is. He desperately wanted to go to her and offer a shoulder to cry on if she needed. Yet he wasn’t allowed to go near the crime scene. You see Joelle thinks he works in security – she doesn’t know about his real job because he’s not allowed to tell her about his real job. At least not so early in their relationship so she’s been pretty much kept in the dark in regards to her boyfriend.

And anyways, Callen had to investigate the case. The thieves weren’t average everyday snatch and grabbers. They were a bit too high up on the scale to do something so juvenile. So Kensi and Deeks had a chat with the owner of the cyber-security company. And he told them they had bigger things to worry about then his anti-virus program.

In order to create that program, the owner had to get a hold of some of the worst viruses in the world and that’s what he did. He collected them all and put them on convenient servers. And that what the real thieves got their hands on when they held a diversion!

Those servers put more than the Department of Defense in jeopardy. They actually put their world at risk and funnily enough they’re worth millions for all potential buyers that have been dying to get their hands on it.

However, once the team got a hold of some of thieves involved, they appeared to not know where the malwares were. The ones that could speak and were not in fact zoned out of their minds made it known that the malware was hidden.

So the team reviewed the security footage from the break in and they saw when the pass off was made. But it wasn’t good news for Callen. Apparently, one of thieves had planted the malware server on Joelle while she was taken hostage and now she’s at risk because of it.

Callen was in a tough position He knew he had to do his job but he also knew what it would mean for his relationship if he ended having to tell Joel he lied. So making that decision was bound to be hard though in the end he followed his conscience.

Callen was the perfect person to do a sting on his own girlfriend so he was chosen to go into her home and collect the malware. Yet to do so he had to go over to her place acting like the concerned boyfriend all the while his friends were secretly watching them from outside. Thankfully, though, Callen didn’t have a problem recovering the malware – what he had a problem with was the men that came gunning for Joelle after their inside men handed over her information.

It appears the owner of the cyber-security company thought he could make some extra money on the side. So he made a deal with a few people (no one should be making deals with) and they were all supposed to get a cut of the action when they sold the malware. But there proved to be a glitch in their plan. Hence they were forced to act quickly and spontaneously. You see no one had suspected they would need to ditch the server so the owner had to later use his advance computer knowledge to track Joelle down.

And having men shoot at them at the same time he was returning fire – is what destroyed Callen’s cover.

Callen kept Joelle safe and he took down the men that were after her. But afterwards she couldn’t even look at him because she felt so betrayed. Callen had lied to her about everything. Including Sam and Sam’s wife. So Joelle told him then and there that he should just leave.

And sadly that would have been the end of them. Yet something appeared to change on her end. Maybe it was simply a day she needed to think things over but later Joelle went to Callen and it looks like she’s offering him a second chance. With conditions – of course.

Joelle wants Callen to be honest with her and if he remains so then who knows what will happen?