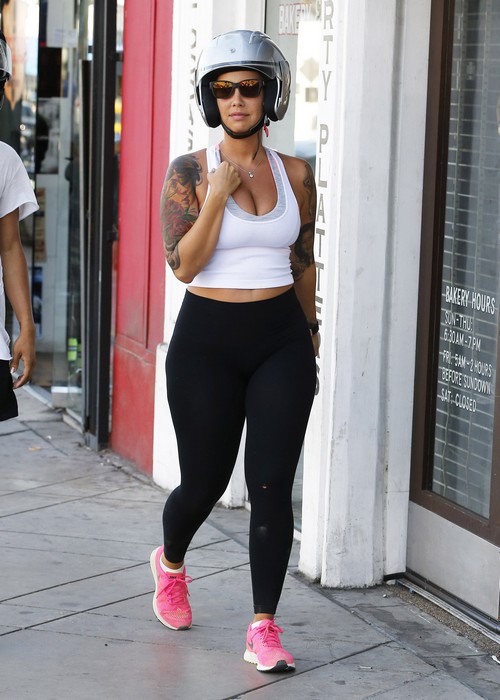 Mariah Carey and Nick Cannon are getting divorced, Amber Rose and Wiz Khalifa are getting divorced, it’s a divorce party all up in here. Of course, the two divorces are intricately connected, largely due to Nick’s alleged inability to keep it in his pants. After all, Nick’s reputation for fidelity has taken quite a beating since he split with Mariah Carey and reports of his mistresses emerged. Will Wiz Khalifa use the alleged Amber Rose hook-up with Nick Cannon to get out of paying his ex-wife the $1 million she is trying to collect from her prenup? We expect Wiz to fight Amber’s $1 million prenup grab for cash.

See, we totally predicted this when Nick Cannon first started ‘working’ with Amber Rose, supposedly in order to help her relaunch her career. I wasn’t aware she even had a career at this point, but I digress. What exactly has Amber done besides strip and sleep with famous rich men? Unfortunately for Amber, her ‘business arrangement’ with Nick was fairly transparent to everyone around her, including her husband, Wiz Khalifa. Obviously, Wiz didn’t take the idea of his baby mama hooking up with Nick Cannon all that well, and ended up dumping Amber’s ass. Sure, Amber’s the one who filed the divorce papers, but that’s because she wanted to beat Wiz to it and get a jump on the media and the pre-nup $1 million. Plus, she was sick and tired of playing the stay-at-home mother while Wiz was off on his tours, and Nick was offering her a way out.

I mean, how creepy is that? I’m starting to have a whole new level of sympathy for Mariah Carey for putting up with this creepazoid. I know people give Mariah a lot of crap for being a diva and being super high maintenance, but she’s not the one who cheated on her husband. No, that’s all Nick Cannon. Not only did he cheat on Mariah Carey [after going public with their relationship troubles], but he then homewrecked Amber’s marriage to Wiz – and all for ‘business’. Ughh.

Now, Nick’s totally going to try ‘helping’ Amber during the divorce proceedings and her ‘business’ collaboration with Nick will assuredly lead to an eventual public romantic relationship.