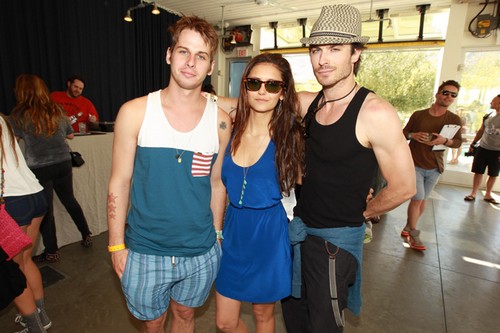 Vampire Diaries fans have been on high alert since CDL revealed that Nina Dobrev has a new boyfriend and mystery man in her life. Seeing as how Ian Somerhalder and Nikki Reed don’t appear to be breaking up anytime soon – Nina Dobrev has been out on the prowl. We all know she is practically incapable of being single. Nina has been desperately trying to keep her new relationship on the down low, but we have finally cracked the mystery, and we totally get why she didn’t want anyone to know.

What comes around goes around. Nina is apparently giving ex-boyfriend Ian Somderhalder a dose of his own medicine and dating one of his friends, Mark Foster, of the band ‘Foster The People.’ Our confidential source confirms exclusively to CDL that two people close to a member of Mark Foster’s immediate family report  that he and Nina Dobrev are indeed a couple and have been dating for several weeks now.

We’re not sure exactly why Nina would want to keep her relationship with Foster a secret, personally we would want to rub it in Ian’s face. But, it looks like Nina is actually taking the high road and opted not to parade around town with sloppy displays of PDA like Ian and Nikki Reed did when they first started hooking up. Or, there is always the possibility that Nina is still hanging on to hope that she and Ian will get back together, and she doesn’t want to kill those chances by announcing that she is dating his friend.

Regardless of why Nina Dobrev is keeping her relationship with Mark Foster on the down low, it’s safe to say Ian Somerhalder is not happy about it. But, now he knows how Nina felt when he started dating Nikki Reed. Do you think Nina and Mark Foster make a cute couple? Or would you rather see Ian and Nina kick Mark and Nikki to the curb and get back together? Let us know what you think in the comments below!