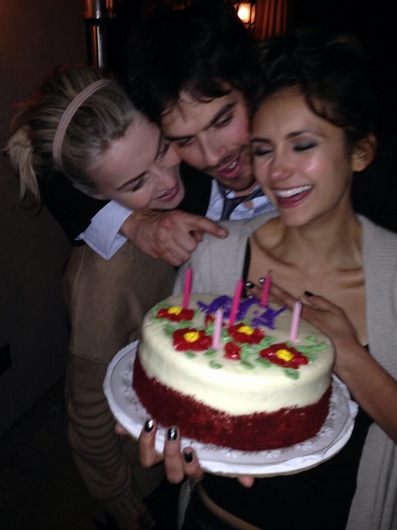 Nina Dobrev and Ian Somerhalder caused the Interwebs to light itself on gossip fire after the former lovebirds shared a kiss on the cheek, all the while accepting their Best On-Screen Chemistry award at the People’s Choice Awards. They joked about their awkward on-screen and off-screen love affair, and honestly, it seemed like they were as close as ever – either that, or they’re the best actors in the world.

Obviously, this little show of affection and flirtation led Vampire Diaries fans to wonder if Nina and Ian weren’t back together, as has been rumored for the past couple of months. I mean, Nina’s relationship with Derek Hough barely lasted a millisecond in relationship universe, and she and Ian have reportedly been spotted hanging out in Atlanta quite a lot recently. So are they really just ‘best friends’, are they friends with benefits, or are they dating again?

Well, sources tell us that while Nina and Ian aren’t technically dating again, they are seeing each other – although they’re both doing their best to keep it quiet. They’re not sure if they’re going to go back into full dating mode, especially since they’re still on good terms and don’t want to ruin their existing friendship. There’s also a rumor going around that Nina’s not sure whether she’s willing to go through the public speculation and media attention that comes from being part of a beloved Hollywood couple, especially one that has so many fans.

Either way, whether Nina and Ian are dating or not, they’re keeping in on the down-low. Whether they go public again will really depend on how their relationship progresses, and how crazy the focus on them is as the show goes on.