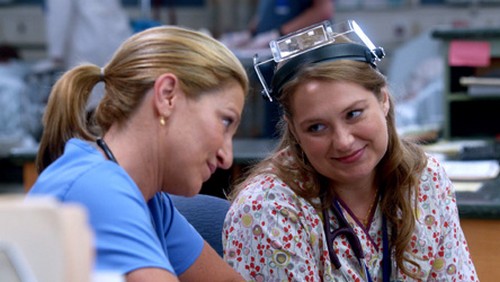 Tonight on Showtime the twisted and darkly funny NURSE JACKIE is back with a new season of little white lies and little blue pills. Jackie realizes sobriety is the ultimate cover for getting high, and now she’s saving lives at work, taking care of her kids, and her boyfriend is loving the new her. She’s got everyone fooled, but what goes up must come down.

If you have never watched the show before, every day is a matter of life and death in a hectic New York City hospital, but for Nurse Jackie that’s the easiest part. Between chronic back pain that won’t quit, and a personal life on the constant edge of collapse, it’s going to take a white lie here, a bent rule there, and a handful of secret strategies to relieve the pain, and stay one step ahead of total disaster.

On last season Jackie and Kevin’s divorce was finalized and she began a new relationship with a cop, all while struggling to remain sober; Zoey and Jackie became better friends after O’Hara returned to England to raise her baby; A new head of the ER was hired, Dr. Prentiss, who had an unorthodox medical background; Coop tangled with a hot but incompetent new intern; Akalitus dealt with memory loss; Grace rebeled in a big way leading to a showdown between Jackie and Kevin.

On tonight’s premiere episode season 6 begins with Jackie using drugs again, but she covers it up by attending NA meetings and regularly going to the gym, where she gets pills from the locker-room towel girl. Meanwhile, Jackie is assigned to shadow Dr. Roman at the hospital, and she bonds with an outspoken Southern woman who agrees to become Jackie’s sponsor.

Tonight’s episode looks like it is going to be great and you won’t want to miss it, so be sure to tune in for our coverage of Showtime’s Nurse Jackie tonight.  While you wait for our recap hit the comments and let us know how excited you are about the new season?

Jackie is swimming laps. She comes up for air and then goes for another lap. In the locker room, she grabs a towel and heads to her locker. She opens it and sees the pills she got with her towels. She walks back to the attendant and tells her it was a little light and gives her some money. Grace snorts a line of something and then wipes the residue away. She puts on her eyeliner. There’s a knock at the door – it’s her Dad ready to get her off to school. She kisses him. Jackie pops a couple of pills by her locker then dresses and heads out to the workout area.

Frank is there working out and they discuss plans but he has to work and she has the girls. She says she’ll call him, they smooch, hug, swap I love you’s and she leaves. She arrives at the hospital and heads in. Thor asks if she’s been at the gym and he tells her she makes him feel like a slob. Gloria and Ike greet her and Zoe tells her about a kid she’s having problem doing a blood draw on. Zoe tells her she’s like a different person when she goes to the gym and she says that’s why she goes.

Jackie comes to take the blood and the mom is annoyed and doesn’t want his blood drawn. She demands to talk to a doctor and Ike is there and tells her they do need the blood sample. Jackie tells the mom to rub the boy’s neck and she does and it’s over quickly. Someone comes in moaning and call for a doctor. Carrie stands to help but Ike glares her back to her seat.

Fitch asks if she’s off probation soon and she says they are going to let her know. She says it’s been months and she feels tied down. Fitch has a plaque and he says he gave a scholarship to his alma mater and she asks why and he says it makes him happy. She tells him America isn’t happy and that Mexico is happier then scoffs. She asks Fitch to help her and he reminds her she tried to sue him.

Jackie comes across a pill in a cup and brings them to the pharmacy. She finds Eddie naked with a woman and tells him she found percocet. She dumps them into the disposal bin and tells him just say no. Then she asks him if this is a bad time. He smiles and she leaves.

Ike tells everyone that Dr. Roman is back today and says there were issues but not all were her fault. He says that there was not enough oversight and Fitch starts to protect. Ike tells Jackie that Carrie is assigned to her and says she can’t leave her alone. Zoe tells Thor she feels sorry for Carrie and he tells her it’s easy for her to be sympathetic when her life is perfect. Zoe is surprised that everyone knows about her and Ike.

Carrie checks a guy who has an upset stomach and she tells her she’ll get anti-nauseants. She goes to the bathroom and takes a pill. Zoe knocks on the glass and Ike comes in. She tells him everyone knows and their cover is blown. Ike says that means they don’t have to worry and she says she’s been woring on Downton Abbey levels of discreteness. She worries about Acolytis but he says he’ll make sure it’s all cool. She doesn’t want to be fired. He tries to smooch her but she says discretion and leaves.

Jackie stares down at the water and then splashes her face again and again. She looks at herself in the mirror. The lights go out and she asks what the f-. She goes out to investigate and sees people wandering aimlessly around the ER. Thor calls her for help and she goes over to assist. Gloria comes in and says they’re working on it and the generations kick in just as Ike complains about them. Jackie says shit happens and Zoe stares at her. She rolls over and tells Jackie she was going to tell her about Ike and Jackie says she wasn’t.

Jackie talks about love but Zoe says both of them are not at the same place love wise. Her alarm goes off and Zoe tells Jackie it’s time for her meeting and she says she’s a good friend so she’s reminding her. At the meeting a guy talks and then Antoinette – another group member – tells him it’s BS. Jackie says no cross talk and Antoinette gets sassy so Jackie walks out and takes a pill. Antoinette runs out and grabs Jackie for help. One of the people is seizing and she turns him over and crams Antoinette’s wallet in his mouth then rides along to the ER.

Carrie says it’s a cocaine OD and asks where she found him and she says at her AA meeting and Carrie says that makes sense. Jackie is distracted by pretty lights because she’s high and is touching the defribillator when Roman zapped the guy so she gets stunned. She comes to and Ike and Fitch are working on the guy. Ike chews Carrie out and tells Jackie to lie there and take it easy. Eddie comes in and tells her his phone needs charged and asks if he can plug it into her ear. He tells her the girl is Heather but that’s not with her exclusively. He tells her he’s glad she’s okay.

Carrie tries to tell Ike that it wasn’t her fault. She says Jackie was a drug addict but that doesn’t mean she still is. Gloria comes in and calls Roman to her office and Carrie whines. Ike tells Jackie this is their chance to get rid of her but Jackie tells Gloria it was her fault – that Carrie called clear. Ike is disappointed. Fitch comes to talk to Jackie and she sees that she still has Antoinette’s wallet. Jackie sees Carrie talking to the man’s wife and rushes out to stop her. She tells her she knew him from AA and that he set a good example for them all. She stopped Carrie from telling her the guy was using.

She sees Antoinette in the waiting room and takes her wallet over. They discuss how this will be the talk of all the AA meetings for weeks to come. She invites Jackie out to lunch. Antoinette sniffs a drink on the waitress’ tray and she says she likes looking at it, but has been clean for a decade.

Fitch looks at his list of goals. One is to be chief of the ER. Carrie comes in and says she’s worried about him. He says no one worries about him. She says she’s also hiding from Ike. He says he found out why Mexico is happier – greater emphasis on family – he looks it up. She says she misses him and asks if he missed her. He says he thought she was going to get fired today and was happy because then they could hook up. He says he can’t touch her even though he wants to and his lawyer would kill him. She unbuttons her blouse and shows him her red bra. She says it’s clear and he starts to touch her but says she has to make the first move. She leans in and says maybe she will and then goes. He says he’s so f-ed.

Gloria sees Carrie come out of Fitch’s office buttoning up as Ike comes in to talk to her. She says you shouldn’t shit where you eat and then Zoe comes in because she thinks Ike already told her and Gloria isn’t happy to hear they are dating. She says she still doesn’t know and ignores them. Zoe says they are going back to work and she and Ike leave.

Jackie tells her new friend she hates the program and Antoinette says she hates the God stuff and she picks and chooses what helps her. Jackie says that she had a cake on her one year anniversary and she took a pill. Antoinette says her first relapse was three months long and she had to hide it from her husband when she took bubble baths with whiskey. Antoinette admits she’s relapsed many times. She asks Jackie if she has a sponsor and Jackie says she’s not good with authority. Antoinette tells Jackie she’s good with people who aren’t good with authority and Jackie agrees.

Jackie comes home and unscrews a power plug where she hides her pills. She’s chopping one up when Grace comes downstairs. She says she forgot her choir robe and tells Jackie she doesn’t look like she had a big accident. She tells her she broke plans with friends because it was a mom night and is pissed at Jackie. Grace tells her whatever. Jackie asks her to wait and asks how she’s getting to her dad’s. She has a girl waiting outside and Jackie says she doesn’t like her riding with people she doesn’t know and Grace gives her attitude then goes.