BY Stormy Elizabeth on May 25, 2014 | Comments: one comment
Related : Nurse Jackie, Recap, Television 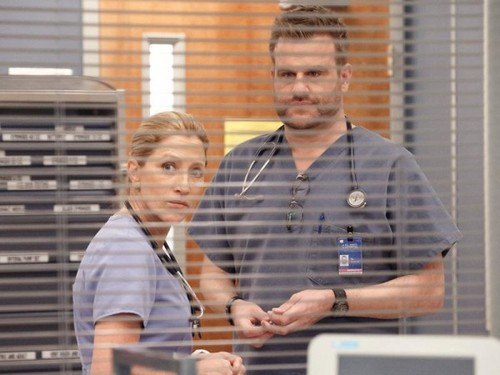 Tonight on Showtime the twisted and darkly funny NURSE JACKIE is back with a new episode called, “Rat on a Cheeto.”  On tonight’s episode Jackie comes to a crossroads when she finds drugs in Grace’s room. Meanwhile, Akalitus names Zoey nurse of the month; and Coop is named chief.

On last week’s episode Jackie’s fake identity was compromised – but she had more pressing problems to deal with: she was on her last bag of pills, Frank had just moved in, and her sponsor Antoinette was hounding her about her sobriety. Meanwhile, Prentiss planned a big night out with Zoey, but their date was cut short when she suspected that something was wrong.

On tonight’s episode Antoinette makes a harrowing confession when she confronts Jackie about her addiction and it has a sobering affect on Jackie. Later, Jackie comes to a crossroads when she finds drugs in Grace’s room. Meanwhile, Akalitus names Zoey nurse of the month; and Coop is named chief.

Antoinette is not ready to give up being Jackie’s sober sponsor without a fight. She doesn’t care that J fired her – she shows up at the hospital for a confrontation/intervention about Jackie picking up the pill habit again. Of course Jackie gets angry – don’t all addicts when they are caught? She claims that she’s functional and that lives depend on her but then Antoinette points out that she’s actually putting lives at risk, but of course Jackie isn’t going to agree that’s the case.

She tells Antoinette that she’s good at her job, has a good relationship and that her life is great. She says she only takes a pill or two a day and tries to turn it around on Antoinette and accuses her of making this about her. Antoinette is having none of this and tells her that she’s been where Jackie is and has relapsed over and over and over and that she actually killed her husband in a car accident while she was high on a Saturday morning. Antoinette says that was her final and ultimate wake up call that really sobered her up for good.

Antoinette tells Jackie that she’s good at fooling all the people in her life – her kids, her BF, the people she works with – but says she can’t fool Antoinette because she’s been there, done that. She promises that Jackie when she crashes (which is inevitable) that she will be there to pick up the pieces with her. She tells her that no matter what, she’s still her sponsor. Jackie seems to hear the clarion call of common sense (maybe, hopefully) and hands over her baggies of pills and tells Antoinette that it’s all that she has.

Knowing Jackie, this may not be true, but since Frank has dug through her home stash and the work hidey hole disappeared, maybe this is true (doubtful). Remember that last episode, we saw Grace doing dope at a club – pills that ironically originated from her pill-popping mother. This week, she gets an award at school for doing volunteer work. Jackie shows up for the award ceremony though Grace gives attitude and clearly doesn’t want her mom there.

What she actually got the award for was setting up an Alateen chapter at her school. If you don’t know, this is a support organization for kids of addicts and drunks. She speaks and says that even if your parents are making bad decisions, you don’t have to, yada yada yada. Is anyone buying what she’s selling? And how embarrasing for Jackie since Grace is essentially broadcasting that there is an addict in the family.

Kevin and Jackie act the proud parents but then later, Grace’s new troublesome gal pal Mandy hides a bag of oxy in Grace’s room with Grace’s tenuous permission. Wow. Bet Jackie would like to come across that stash right about now.

If you remember last time, Ike was running back off to be GI Joe and so that means the ER needs a new chief. Long suffering and occasionally underappreciated Coop gets the job. Who else were they going to give it to? Carrie Roman? They’ve got a toy guru for tonight’s big case who has respiration problems. His condition is so serious he travels with a private doc of his own.

When Coop has to do an aspiration on the guy’s lung, the private doc gets all up in Coop’s grill and Coop is not having it. He continues with the aspiration while elbowing the visiting (dick) doc out of the way. Coop has been so ready to be chief that maybe playing second fiddle to Ike and eating a little bit of crow has allowed him to mature into a better leader. Food for thought…

Also, Zoe and Carrie have to take a fat patient to another hospital and they do a little bonding. Ike shows up to say goodbye to Zoe but alas, not in person, he’s on skype and the reception is not great. Carrei hustles her to the chapel for better reception because Jesus has kick ass WiFi… Zoe doesn’t take this well and has a teary break down. No kidding.

Jackie is at work and is having some serious DTs – she does the junkie thing and loads up on sugar – Sour Patch Kids specifically – but it’s not helping enough. She hits up her old sex for drugs buddy Eddie for a hit of Soboxone to help ease her drug cravings. He caves (of course) and gives her the stuff but he delivers a stern warning as well for her not to mix it with her bad pills. Will she listen? Does she ever?

Naturally, Jackie finds the Oxy stash in Grace’s room – isn’t that like leaving bacon for a bloodhound to find? She pops a few and then crashes because she did exactly what Eddie told her not to do (and in record time) and then conks out. Soboxone plus Oxy must be like me on Ambien because it loosens Jackie’s tongue and she admits to Frank spontaneously that she popped the pills.

Frank wants to call 911 but Jackie gets pissy and defensive and tells him to pretty much f- off. So he does. Who wouldn’t? He leaves and then Jackie has a moment of clarity and realizes she just ran off a guy who is tolerant of her worst side and she runs after him in desperation and asks him to help her. But can anyone really help her when she’s so clearly unwilling to help herself?