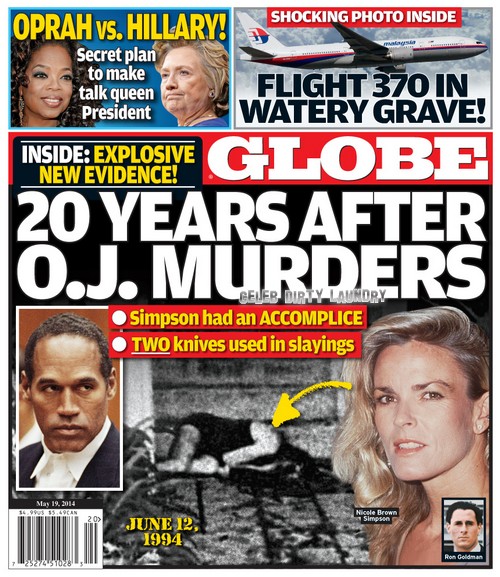 We are about a month away from the 20th anniversary of the slaying of Nicole Brown Simpson and her companion, Ron Goldman and so media attention is inevitable. So too, is brand new investigative reporting and digging for new theories that we had yet to hear of. According to the May 19th print edition of GLOBE Magazine not only did Simpson commit the murders but he also had an accomplice. They insist that there were two knives used in the slayings and that there is an awful lot of information that up until now has gone all but ignored. We all know the story of Simpson and how he was acquitted of the murders but later ended up in a Vegas jail after trying to steal back his own stuff.

Obviously it’s kind of irrelevant what information is unearthed at this point in time because Simpson can never stand trial for the murders again so his acquittal is a done deal under the judicial system in spite of the majority of the general public believing that he was indeed guilty. GLOBE has told us in previous issues that Simpson is in particularly bad health behind bars and that there is a fairly decent chance that the former pro football player will die in jail.

Here we are two months later still trying to piece together what exactly happened on Malaysia Flight 370. As of now it seems the only thing that investigators are 100% sure of is the fact that the full flight made a left turn off track. The May 19th print edition of GLOBE reveals that passengers are in a watery grave deep in the Indian Ocean and that makes sense to many. A lot of funding has been poured into the search, do you agree with the countries who have pulled back their resources because the recovery has been dragged out for too long? Tell us your thoughts in the comments below!

Let’s not neglect to mention the secret plan to make Oprah President! All the details of this political mystery will be inside this week’s copy.

If you want the best in news coverage this week then make sure to pick up your copy of GLOBE Magazine – you will learn details of O.J. Simpson’s barbaric murders of Nicole and Ron that no other news outlet is aware of. Furthermore your weekend will be enriched by the many research articles and exposes within GLOBE’s covers. Do like I’m going to do – leave plenty of time to relax and enjoy the May 19th GLOBE – you’ll be a happier and wiser person when you are done!