Outlander LIVE Recap ‘The Wedding’ Season 1 Episode 7 Review: Finally Get The Sexy Times, Was It Worth It? 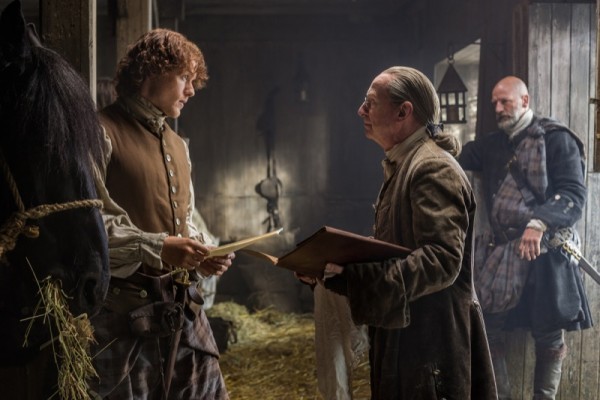 Damn, Outlander. Take note, Game of Thrones, THIS is how you do sex scenes. They have really been holding out on us, haven’t they? Obviously, tonight’s episode wasn’t a surprise to anyone who had read the books, but I must say, I was almost taken back by how intimate and tender the sex scenes between Jamie and Claire were. Sam Heughan’s and Caitriona Balfe’s chemistry continues to be one of the best parts of this show, and it was out in full force last night. The looks that Jamie kept shooting Claire, almost as though he couldn’t help himself? Swoon for days, ya’ll!! And the actual sex? A little awkward, emotional, romantic, passionate, and more akin to sex in real life than most of the romantic scenes we see on television. Well done, Outlander writers, directors, producers, and actors, well done.

I do want to point out one tiny thing before I get into a recap, which is that this episode [The Wedding] was both written by a woman, Anne Kenney, and directed by a woman, Anna Foerster. I wonder if that played any part in how refreshingly female-centric the sex scenes were, or whether they were just sticking close to the source material. A bit of both, I except.

Ok, enough dilly-dallying, let’s get to it. First things first, the structure of this episode. It was definitely different from the way the previous episodes were shown, and I’ve already seen some complaints about this online. However, I think the flashbacks were a really, really good idea for this episode. If they had just shot the traditional way, then it would have been build-up, build-up, and then just thirty minutes of sex. The narrative flow would have definitely come off more stilted, and this way, it allows you to see Claire’s and Jamie’s bond deepening in a more meaningful way.

Second, how great are Angus and Rupert? Or, for that matter, the nameless Mackenzie kid who had the Bible-off with the priest? All three of them killed it with their comedic scenes this week, and I’m glad the MacKenzie’s are getting their share in the spotlight. Plus, Murtaugh! Claire’s and Jamie’s #1 shipper proved himself to a valuable asset this week, getting Jamie’s Fraser kilt for him and generally being a BAMF godfather.

However, if we’re going to get to all of the MacKenzie clansmen, we can’t leave out Dougal. I loved Dougal last week, but I wanted to hit him over the head with a chair just like Claire did during the Gathering. WTH, dude? You gonna hit on your nephew’s wife literally the night she got married? As the Scottish would have said, have ye no shame, man! Dougal’s just gone to the top of my shit list, although he’s got a ways to go before catching up with Black Jack Randall at the #1 spot.

I also loved the wedding ceremony, which was beautifully lit and shot, as this whole show tends to be. Claire steps out in her stunning wedding dress and Jamie’s breath catches when he sees her [how great was his expression there?]. Then, Jamie gives Claire the wedding ring [from a key, which we still don’t know the significance of], they have a passionate kiss, they do a weird, pagan ritual of cutting their wrists together and having it bound, and Claire looks like she’s going to cry through this whole thing.

Of course, all this was just distraction from the main event. The best part of the episode is also the part that fans have been waiting twenty years to see – all the sexy times between Claire and Jamie! Sweet, innocent, loving, virginal Jamie. The poor guy looked so heartbroken during Claire’s non-stop drinking and cry-faces, and it was clear the only reason he could see any light at the end of the tunnel was because she kissed him back pretty passionately during the actual wedding a ceremony – a fact he actually points out to her. But you know, their getting-to-know-each-other scene was great, and very reminiscent of what most couples do when they first meet and start dating – except they’re doing it on their wedding night instead of their first date. Potatoes, pohtatoes.

Claire finally plucks up the courage to get to it, and then we get some very sensual scenes of him unlacing her dress and them kissing – and then, the awkward losing-the-virginity moment. Yah, Claire’s face just represented what most of the female population has gone through at some point or another in their lives. And then I think I died when Jamie asked Claire whether she liked it, and she’s like, ‘Uh……’ Dude, you lasted like 4 seconds.

To be fair, he did think 2 minutes ago that sex was done back-to-back, ‘like horses’. Oh, you sweet, sweet child. Thankfully, Claire was there to guide him, and then we get some post-coital ribbing from the clansmen while Jamie goes to get some food. Claire, meanwhile, sits on the bed and tries not to feel too guilty. Woman, do you not SEE the Adonis in front of you? I get it, you love your boring, historian husband, and this show has made him twenty times more interesting than the books. All the incessant flashbacks have shown us how bad you feel about this, but you’re drunk and you’re naked with a hot Scottish guy who’s clearly head over heels for you. Just let go, already.

And thankfully, let go, she does. Their next two sex scenes are much, MUCH better than their first sex scene. Their second time is all passion and heat, followed by Claire going ‘downtown’ on Jamie. And then Jamie gives Claire his mother’s pears, tells her how much she means to him [he totes LOVES her], and she’s so touched that they have sex a third time, and this time, it’s clearly all about the emotional connection.

The next morning, they’re acting like a sweet, married couple who are at the peak of their honeymoon period when Claire’s wedding ring to Frank rolls down her dress and lands in a crack on the floor. In a very Lord Of The Rings-esque moment [at which point, I half-expected her to whisper, IT’S MINE, PRECIOUSSSS], she picks up the ring on the floor and puts it on. No, she doesn’t disappear and start seeing Sauron’s eye everywhere, but she does stare at the two rings on her hands, with a clear feeling of guilt and heartbreak on her face. Annnddd, fade-out.

What did you guys think of this episode? Did it live up to your expectations? Did you want more? Were you upset by the lack of certain scenes/lines being omitted from the book? Let us know your thoughts in the comments below.