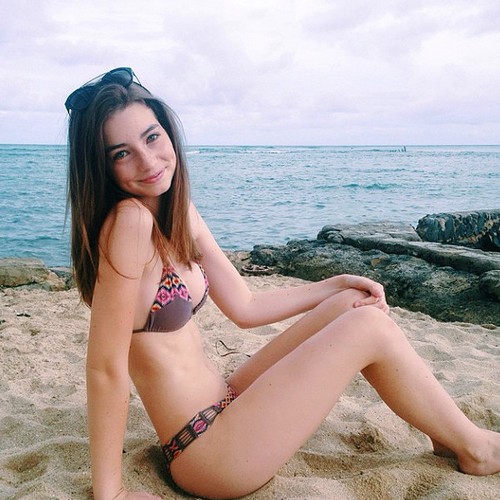 It’s been one year since Paul Walker died, and most people closest to him still haven’t recovered. None of the Fast and Furious crew or cast members have been able to speak about his death in public without tearing up, and it’s obvious that they’re still recovering. However, there is one person who seems to be doing surprisingly well in the wake of Paul Walker’s one year death anniversary – his own daughter, Meadow Walker.

Meadow was the sole beneficiary of Paul Walker’s fortune, although she doesn’t yet have access to most of the millions. However, most people assumed that after Paul’s death, Meadow would go off the deep end. After all, she WAS a teenager, and teenagers are moody and rebellious even when their parents are around. But alas, Paul’s death might have had the opposite effect on Meadow Walker, as a source tells Radar Online, “Meadow is a stellar student and is looking at colleges right now.”

Meadow honored her father’s death anniversary with a simple Instagram photo of them when she was younger and message reading, “I love you.” Again, we can’t imagine what Meadow Walker went through and what she’s still going through, but the fact that she’s been able to keep her life together is a testament to her strength.

But alas, that’s not the only thing happening regarding Paul Walker this week. In much unhappier news, Paul’s private and personal files were stolen from his management company this week, leading to a huge blow against the company [Luber & Roklin] as well as his close family and friends. The specter of Paul’s death continues to loom over his professional career, and I’m sure everything will be revisited before the next Fast and Furious movie comes out – especially as Paul Walker’s character clearly does play an important role in the film, and hasn’t been downsized due to his untimely demise.