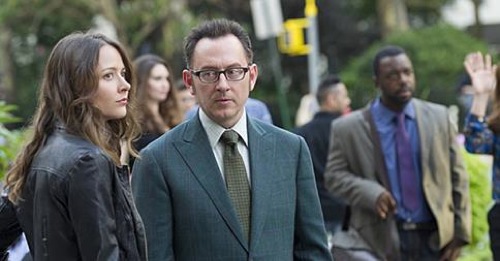 Tonight on CBS Person of Interest returns with an all new Tuesday October 14, season 4 episode 4 called, “Brotherhood.” On tonight’s episode an NYPD gang investigation targets a pair of young siblings whom Reese [Jim Caviezel] is protecting, threatening his cover job as a detective.

On the last episode Finch recruited Fusco to stuck close to the latest POI, a professional “wingman,” but learning how to approach women soon became the least of his worries. Meanwhile, Reese had to find a way to play by the rules at his new day job as the Machine sent Finch and Root on a mysterious errand. Did you watch the last episode? If you missed it, we have a full and detailed recap right here for you.

Tracie and Malcom Booker are tonight’s new POIs. Although neither Reese nor Shaw could locate either child at their respective schools. The kids have been in foster care since their mother was brought up on weapons possession charge and apparently they’ve run a bit wild without proper and adult (a real one and not just one cashing checks) supervision.

Reese was trying to track them down when he came upon a scene of crime. Hence, his suspicious mind took over and he checked out the scene for himself. It didn’t take long for Reese to figure out a drug trade had gone bad. However the drug money that was supposed to be at the scene also happened to missing.

So, a few seconds later, he wasn’t all that surprised to hear from Finch that the other man had found the kids and that they were currently shopping.

The kids disappeared before Finch could get to them. And it’s imperative that Reese find these kids before the gang they inadvertently robbed finds them first. The gang the kids got involved with happens to be the Brotherhood. As in the notorious gang that doesn’t believe in territories and mostly relies on killing anyone that gets in their way.

But oddly the first thing the kids did upon getting their hands on half a million dollars was pick up nice clothes for themselves. And when Reese did find the kids again – they were heading to a lawyer’s office.

Reese and a DEA agent found the kids at the exact time the Brotherhood located them. And that’s thanks to Shaw. She apprehended one of the Brotherhood’s men and made him make a direct call to Link. Leaving Link to reveal where his men spotted the kids.

Shaw couldn’t lend a hand afterwards because they didn’t want to risk Reese’s cover. So he worked on dealing with the Bookers and she dealt with her prisoner.

Reese got Tracie and Malcolm. But he still didn’t have the drug money they stole. Malcom it seems was playing it safe and had decided to hide the money rather than walk around with it. He was eventually going to use it to buy his mother a decent lawyer. The illegal weapons charge that saw her locked up wasn’t even her gun. It was her ex-boyfriend’s gun and one day when she was throwing him out of the house – he created a scene which ended with the cops coming in and making arrests.

Though Reese convinced him to give up the money. And he was able to do that by promising to keep both kids safe. Yet he made a mistake that he was unaware of until it was almost too late. He told the agent that was with him where she could find it and then he watched her disappear all the while believing she was going to get the money in order to build a case.

Earlier she had told him she called in for backup but that was later revealed to be a lie seeing as she was the inside man the Brotherhood was using to track down the kids. As for her disappearance, Agent Erica got the money and then kept it for herself. Meaning she double crossed everyone in the end.

Link was still hunting the kids and last Reese checked – Erica knew where they were hiding. So he made sure to call Fusco and have his backup ready and waiting.

He and the kids survived the first onslaught of the Brotherhood’s men and from all the appearances they weren’t going to outlive the second round. So Malcom then tried to sacrifice himself to save his sister. The gun that was found inside of his home really had belonged to him and that’s why he was doing so much to make everything right.

Yet turning himself wasn’t going to make it better so Reese and Shaw arranged a deal with Link. If the other man left them all alone – Shaw wasn’t going to burn the majority of his boss’s product. She had found it with the help of her prisoner.
Though funnily the person everyone had been searching for was actually Shaw’s prisoner for most of the episode. She had the elusive Dominic, the boss, in her custody and she had let him go because she thought he was low level crook. When the truth is he allowed her to follow him and find the drugs. It was all part of his plan.

As for Malcolm, Dominic likes him and wants the kid on his crew so he’s going to spring Malcom’s mom from prison. And Malcolm will probably be so grateful – he fall right in line. Forgetting all about his gratitude to Reese for arranging for him and his sister to be placed in the same foster home.

And just to make things even more interesting, Finch gave Carl Elias all the information he could gather on Dominic. Elias wants to know his enemy and Finch needed to make a deal of his own.