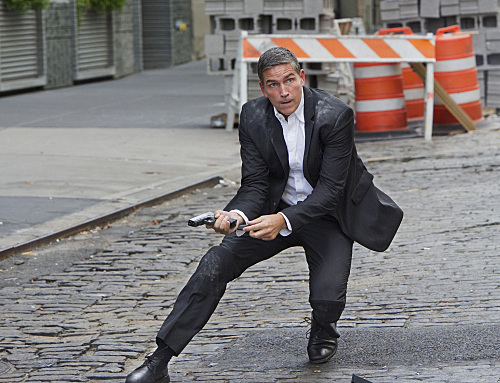 Tonight on CBS Person of Interest continues with an all new Tuesday October 28, season 4 episode 6 called, “Pretenders.” On tonight’s episode a mild-mannered office worker gets into major trouble while posing as a detective. Meanwhile, Finch’s cover profession takes him to Hong Kong.

On the last episode Finch was suspicious when a gifted political pollster’s number came up at the same time that his typically ironclad predictions went wrong, and believed that the two events were linked. Meanwhile, Reese was sidelined by a direct order from Captain Moreno. Did you watch the last episode? If you missed it, we have a full and detailed recap right here for you.

On tonight’s episode Reese, Shaw and Fusco must protect a unassuming office worker who stumbles into a dangerous conspiracy while moonlighting as fake detective. Meanwhile, Finch travels to Hong Kong as part of his academic cover identity.

When children play pretend then it’s really all in good childish fun. But people can honestly get hurt when adults start pretending. That’s why their supposed put away such games as they got older. However Walter, a seemingly timid office worker, never got that memo.

His number came up and at first Shaw couldn’t see why anyone would be interested in killing someone like him. Walter was a no one. Some could even argue that he was less than that. That’s how far off he was under the radar.

The one thing Walter had going in his life was sadly not his. Nor did she probably know his name off of the top of her head. Walter had this huge crush on one of his coworkers and lately said coworker was grieving. Her brother had committed suicide by jumping off a fire escape. But strangely, Walter knew more about her brother’s death than he was admitting.

To his lady love’s face, he passed on condolences. Then behind her back, Walter was secretly investigating her brother’s suicide. And he was doing this by pretending to be a detective. Much like Reese does on a daily basis though not as equipped or effective. Walter eventually found himself in trouble when his “investigation” nearly got him killed.
Reese came to his aid and saved him from really – himself! But Walter refused to drop the persona. He claimed to be an officer even as Reese was dragging him into the precinct. Walter claims the victim’s sister had to come to him asking for help because she believed her brother’s death to be suspicious. So that’s when he started to look into the suicide and what he found could very well be a smuggling ring.

Its doubtable Elena ever asked Walter for his help yet Walter was onto something with his theory. Elena’s brother Abel was involved with a smuggling ring. A very dangerous ring as a matter of fact. So, it’s just unfortunate that someone besides the team found out Walter was looking into the case. Because what Abel and his friends were smuggling into NYC turned out to be guns and ammo.

[12:05:00 AM] Kristine Francis: Abel’s former “friends” contacted Walter at his job. Then later they sent men out to kill him. Again Reese intervened but he couldn’t stop the gunmen from coming after Walter though he honestly tried his hardest. The men just kept coming and they weren’t scared about trying to kidnap Walter from inside of precinct. So it came time for Reese to talk to Elias.

Only Carl Elias would dare to go that far and when Reese went to him – he was proven right. Elias does Walter and that’s because Walter is the only man that knows where a truck load of guns are.

As the story goes, Abel didn’t know he was transporting illegal weapons until it was too late. When he found out, he proceeded to toss the truck and didn’t tell a soul what he did with it. But Abel’s phone could pinpoint where he’s been and lead to the guns. Meaning a simple phone could ended up acting as a treasure map.

So that’s why Walter, who has the phone, is in danger. He’s the only one that could lead various groups (Elias isn’t the only one after it) to a treasure trove of illegal weapons. And people could do more than merely sell those weapons on the black market. With that kind of leverage – they could take over the city. Or more importantly encroach on Elias’s foot hold.

Hence the guns do have to go to someone and luckily Elias wasn’t afraid to let the cops have it. He didn’t want the guns in his city and so he allowed Reese and Fusco to take down the other group that was after Walter. Then destroy the guns.

The group that was after Walter was a figurehead and Elias had seen through it from the start. Dominic, the young kid working his way up to take Elias on had arranged a third party to appear as the fall guy if the deal he made for the guns ever went south.

So when all was said and done with the weapons, Elias called a meeting. He warned Dominic that he wasn’t going to give up his city without a fight. But Dominic saw him as an old man. One he could easily take down. Thus things between these two men didn’t end with a resolution. They were on a brink of declaring of war.

And seeing as we saw what happened between two warring factions last season – I don’t think New York could handle a fight against Elias and Dominic!

While this was all going on, Finch was in Hong Kong for what he said was part of his cover as a professors. But in actuality he was spying on someone. It seems someone else is interested in creating Artificial Intelligence and Finch wanted to make sure he knew everything she was planning.
It would do to have three Machines running at the same time!