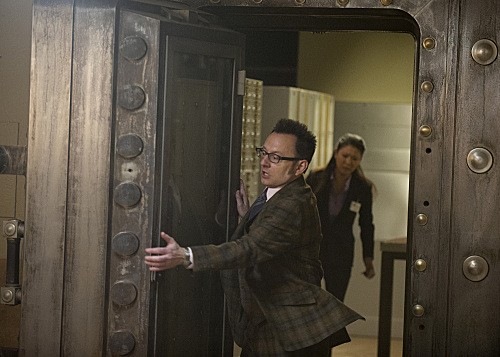 PERSON OF INTEREST comes back for its winter mid-season premiere and we can’t wait to see what happens tonight on the new episode entitled “Aletheia.”  On tonight’s show the team struggle to keep their enemies at bay without Reese.  Did you watch the last episode before the break?  We did and we recapped it right here for you!

On last week’s episode flashbacks to Finch’s adolescence provided insight into his creation of The Machine. Also, the team received the number of an already dying man, and Reese left the POI team behind in the aftermath of the war with the crime organization.

On tonight’s show multiple enemies converge on the POI team as they protect a dying man with a connection to Finch’s past whose number has come up. They struggle to keep their enemies at bay without Reese, who has left the team and their mission behind following the tragic war with HR. However, being down one man could have catastrophic repercussions for the team.  Camryn Manheim and Saul Rubinek guest star as Control and Arthur Claypool.

Tonight’s Person of Interest Season 3 Episode 12 is going to be exciting, and you won’t want to miss it. So be sure to tune in for our live coverage of the new episode of Person of Interest — tonight at 9PM EST! While you wait for our recap, hit the comments and let us know how excited you are about the show. Don’t forget to come back at 9PM for our LIVE recap!

Control wants her program back. She willing to make a a deal just to get it. The first person to tell her where it is gets to live. She tried Harold and he wasn’t any help. He admitted to her he doesn’t have control of where the program. It doesn’t listen to him anymore. Her only other option was Arthur and he wasn’t much help either. Arthur’s disease has erased most of the important things. Like how he created a back up to his Samaritan program. He honestly can’t help her and once she realized that she nearly killed him.

What stopped her was an onslaught of bullets into the hotel room. It seems Shaw had gotten help beforehand. Without Finch’s knowledge she told Root their plan. Luckily for them Root proved to yet again be trustworthy. She got them out of the situation and couldn’t save herself. She was shot trying to escape with the others. Shaw wanted to help but Root gave her permission for the rest to go ahead without her.

Later Finch, Shaw, and Arthur are on the move when Finch wonders about the alleged back up. He asks Arthur only to find his friend had played up his tumor to fool Control. He remembers creating the back up even as he’s forgotten who Shaw is. He can lead them to it. He put it in a safety deposit box under a fake name. Shaw was worried how they’d get in without a key when Arthur, full of surprises, finds what they’re looking for. He had hid it in his medical alert alarm before he had gotten sick.

They’re closing to get the back up when Vigilance arrives on the scene. Arthur had help lead them to the location when they caught him under a drug back at the hospital. Finch and Arthur are still in the vault when the situation outside become even more precarious. Hirsh has arrived. Shaw warned Finch to quickly leave, but he had run out of time. He looked them up in the vault along with the woman that had assisted them. Sadly, she was shot doing this particular job and thanks to Finch she’s locked in without medical attention.

Root is alive although she may wish she wasn’t. Control knows she has a way with the machine and she wants to know how Root did it and how her people can learn to do it. Root refused but how much longer can she last under torture?

Fusco’s attempts to reach Reece were a bust. He thought all he had to do was remind Reece all the good they do yet he hadn’t realized how jaded Reece had become. It seems Carter’s death proved something to him. He no longer believes the team is helping people. He tells Fusco that they were only delaying the inevitable. Fusco wanted to help and he couldn’t so he has to give up. Prior to leaving though he tells Reece he hasn’t hear from Finch in a while. Their friend probably needs their help.

After several hours of pain Root tells Control the machine is more than a simple login. The machine is her friend and her superior. No one can take control of the machine. Control believes her in a way. She understands Root had these delusions and what better way to hurt her than to remove Root’s ability to hear.

Back in the vault, Arthur was going over his program when it suddenly clicked for him. He knows the machine, as amazing as it sounds, is alive. All very nice but outside of the vault has its own problems. Vigilance and Hirsh are in negotiations. Vigilance wants that program and so does Hirsh. Soon one of them will learn they can’t win. Either by threats or a lot of people will just have to die. Vigilance tried out their plan B by directly contacting Finch but he wasn’t playing ball.

Shaw has crafted a way for them to escape through the sewers. Finch needs to prepare Arthur to flee. There’s one thing they have to do before leaving. Finch tells Arthur to destroy the program. This was their dream and Arthur doesn’t want to let his program go. Not with all the work that’s been put into it. Finch had to him the truth. He told his friend that a machine was already up and running. He and their other old school friend, Nathan, were the ones to build it. It also why he knows what he’s talking about. If the program got into the wrong hands then it would only be used by people that would mistreat it. Not give it the respect it deserves. Arthur tells his “baby” goodbye and then destroys it. He didn’t want to be in the wrong hands.

Vigilance detonated a bomb in order to get into the vault. Their men made it in, but didn’t survive pass Shaw. They were close to escaping when the remaining Vigilance team captured the guys. They were going to kill Finch and Shaw when Reece and Fusco finally showed up to save the day. They managed to escape through the sewers like they planned.

Root lost one ear and with the other she got messages from the Machine. Control had foolishly brought a cell phone into the interrogation cage. Root sacrificed one ear in order to grab Control’s weapon. With it she was able to overpower Control. She doesn’t kill her torturer. She’s to relay the machine’s message. The machine will not be under anyone’s control. Instead she’ll be the one in charge. The machine has to be the protector now. From what she doesn’t say.

Root didn’t rejoin her former friends. They apparently slipped up. The bank manager, the one Finch helped saved, wasn’t the real manager. That was impersonator who recently acquired the smashed up Samaritan drive. Arthur may have taken his foot to it, but that doesn’t matter if the drive was switched out. The machine has sent Root after this mysterious woman. While said woman delivered one of the most deadliest weapons in the world to her employer and was then killed for it.

Finch has lost plenty of time but the double blow of the Samaritan getting out at the same time Reece told him he wasn’t coming back must have hurt. It made remember when he had to let go of his father. It was right after he committed treason back in the early 80s. He visited his father in the home and told the man, who couldn’t remember him, goodbye. How many more people will he be forced to let go?