BY Kristine Francis on May 6, 2014 | Comments: one comment
Related : Person of Interest, Recap, Television 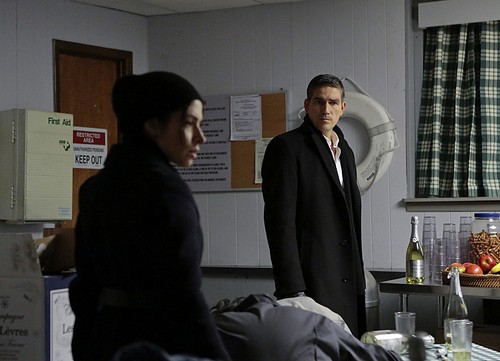 PERSON OF INTEREST returns to CBS tonight for another exciting episode. In “A House Divided,” a mysterious force prevents the Machine from being able to fully predict a fatal event, so it adjusts by sending the team five separate numbers to investigate. Elsewhere, Root’s team of hackers arrive in New York.

On last week’s episode Decima used Samaritan’s feeds to hunt Reese and Shaw, Greer exploited Finch’s greatest weakness in an attempt to lure him out of hiding: his love for his former fiancée, Grace Hendricks.  Did you watch last week’s episode?  If you missed it we have a full and detailed recap, right here for you.

On tonight’s episode when an unknown entity prevents The Machine from seeing the full picture of an impending catastrophic event, it sends the team five separate numbers to help them piece together the bigger picture. Meanwhile, Root’s team of hackers arrives in New York.

Season 3 Episode 22 is going to be exciting, and you won’t want to miss it. So be sure to tune in for our live coverage of the new episode — tonight at 9 PM EST! While you wait for our recap, hit the comments and let us know how excited you are about the show. Don’t forget to come back at 9 PM for our recap!

Tonight’s episode of Person of Interest kicks off with a flashback to 2010.  A man named Jesse Grant is having dinner with his brother Peter and his son Frankie, the FBI shows up at the door and arrests Jesse.  They refuse to give his brother a reason and say it is a “matter of national security.”

Present day – Finch is being held and questioned by Mr. Greer.  Greer informs him he is holding him until the day “Sumaritan opens its eyes and the world no longer needs him.”

Greer meets with Senator Ross and informs him he is not selling Sumaritan but he will provide him with information.  Greer wants the Senator to give him access to thousands of people’s information, so that he can sell it back to the government.

Root has put together a team of tech geniuses and managed to get her hands on seven Sumaritan servers.  She puts them up in John’s safe house and tells them to get cracking.

The Machine has sent Sameen to a hotel, she sits outside in her car taking photographs trying to determine what is the importance of the hotel.  She discovers that she is parked next to Secret Service vehicles, and Control climbs out one of them- she ducks so Control doesn’t see her.

Sameen breaks into a hotel room full of Secret Service men, she shoots them and then finds a security camera where the men were keeping an eye on Control.  She is in another room meeting with Senator Ross.  He wants her to help him gain access to the information so that he can help Greer with Sumaritan.  She doesn’t get why she would pay money for something that is rightfully her’s.  Sameen begs Root to let her kill Control, but Root tells her to hold off.

Greer is still talking to Finch.  He wants to know why Finch crippled the machine and won’t let it go online.  Finch explains that the Machine is smarter than him, dangerous, and doesn’t know what it is fully capable.  It could destroy the world.

Ross meets with the President’s men and Control.  Rivera has no intention of supporting the Sumaritan, the public still “has their panties in a twist” over the last surveillance system they had in place that denied their civil rights.  She hands over a file on a terrorist group called “Vigilance,” she informs him they are going to attack in the next 24 hours and it is going to be huge.  If the President doesn’t reinstate the Sumaritan then they won’t be able to stop Vigilance.

The Machine sends John and Root to a bakery where a man named Jacobs is sitting.  They sit down to talk to him and see why he is important and he pulls a gun out and shoots up the bakery.  John shoots him in the arm and takes him down and they rush over and take his gun.  They find a flashdrive in his pocket and it contains a computer virus.  They realize he is a member of Vigilance and ask him what their plan is.  At the same time Sameen reports that a huge group of Vigilance just arrived at the hotel, and the leader is Peter (form the flashback in the beginning of the show).

Sameen barges in the hotel room and holds Control at gunpoint.  She informs her that she is here to rescue her, something bad is going to happen, the Machine told them, she just doesn’t know what it is yet.  While she is explaining to Control, the bad thing happens, the city experiences a total blackout.

Sameen, Control, Rivera and her men head out into the dark hallway, they are outnumbered and a shootout ensues.  John shows up and saves Sameen, but Vigilance gets away with Control and Rivera.  George Hirsch shows up and Root calls and says the Machine says Finch is in danger and Hirsch knows where Greer is holding him.

Meanwhile Frank, the leader of Vigilance shows up at Greer’s and reveals he has kidnapped all of the Senator’s colleagues.  And, finding Finch there is just a bonus.

Root’s elite hackers have finished their work on the Sumaritan servers.  She sends them on their way.  John and Sameen arrive at the hangar where Finch was being held.  But, he is gone.  There is a television left in his place.  Frank has Finch, Control, Greer, Ross, and Rivera all held hostage and is broadcasting a mock trial for them live.