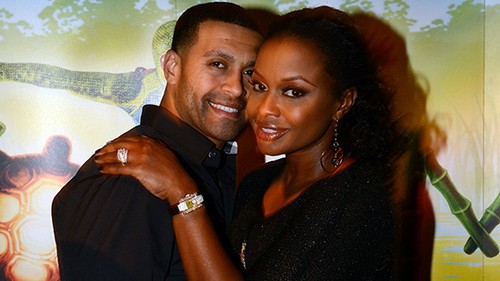 So as we predicted long ago Phaedra Parks is filing for divorce from Apollo Nida. Latest word from the Real Housewives of Atlanta set is that Phaedra Parks is taking her donkey booty and running for the hills from her imprisoned hubby Apollo Nida, currently serving eight years for bank and wire fraud. Phaedra’s rep Steve Honig spoke exclusively to E! News and said in a statement that the Southern Belle “has retained an attorney with the intent of amicably ending her marriage.” Is anyone surprised? CDL is not.

Matter of fact, it is about dang gone time. Some of us are still scratching our heads as to why Phaedra ever married this criminal enterprising joker in the first place. Let us not forget, this is his SECOND long term prison sentence. Phaedra is an attorney at law, who has taken an oath to uphold it and defend it. It certainly never came off as a match made in Heaven.

Granted, maybe Phaedra Parks saw the good in him and looked pass his shady ways. Well yet and still, Apollo Nida did not come off as an appreciative husband as a matter of popular opinion. Between spending thousands of stolen dollars at strip clubs to brag about it on national television and flirting with Phaedra’s RHOA co-star Kenya Moore, this guy just seemed like bad news. On top of that, in the weeks leading up to his imprisonment, ol’ boy was hanging out in clubs and bars; he was not at home with his wife and two young boys both under age four, Dylan and Ayden.

On top of all this, word on the curb is that Apollo was begging Phaedra for money to help pay off his restitution! Phaedra girl, we over here at CDL congratulate you on finally taking the first step towards getting your life back in order and that first step is right to divorce court.  Hopefully you don’t have to give him too much money to end things amicably. Now the question on our minds should be, was there a prenuptial agreement in place? At any rate, CDL will be watching this story closely as it develops. In the meantime, we can always use your help washing these types of dirty loads out. Share your thoughts on Phaedra filing for divorce with us in the comments section below. Let us know if you think we are being too hard on Mr. Apollo too.