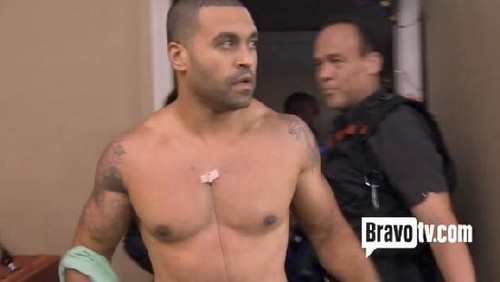 Phaedra Parks and Apollo Nida are getting divorced – it’s just a matter of when. The couple have always had a tumultuous on-screen and off-screen relationship, but is their marriage finally headed for a divorce right now? Sources claim that the couple is currently shooting for the next season of Real Housewives of Atlanta together, which has increased rumors that divorce drama is underway.

After Apollo got hit with a $2 million restitution penalty, in addition to getting sentenced for eight years in federal prison on fraud charges, Phaedra isn’t likely to stay with Apollo. Sure, she gave the impression that she would stay with him through thick and thin [after all, isn’t that what marriage is about?], but that kind of loyalty isn’t going to last through monetary and legal issues.

Plus, Phaedra didn’t even turn up to Apollo’s sentencing, so I think it’s pretty clear that she plans on dumping him as soon as possible. It’s not like she can afford paying all of Apollo’s debts, which will add up to roughly $100,000 a year. That’s not to mention that she would be sharing the liability of his fraud charges, for which he stole the identifies of 50+ people, laundered millions of dollars, and created several fake companies.

To be very honest with you, I’m surprised the guy even had the brains to pull off that kind of operation. It’s also pretty obvious that Phaedra knew all about Apollo’s illegal activities, even if she pretends as though she was oblivious to the whole thing. But in that vein, Phaedra has always looked out for herself, first and foremost. There’s no chance of her staying with Apollo if it poses a risk to her financial security and her place in the Real Housewives franchise.