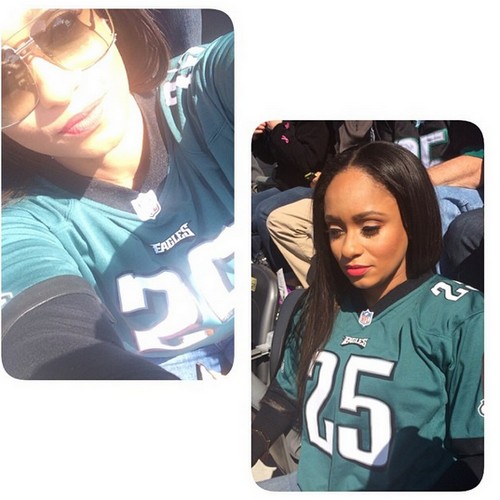 Is Porsha Stewart [Williams] headed to Love & Hip Hop? No wonder Real Housewives of Atlanta star Porsha Stewart was kicked off (demoted) from the Bravo reality TV show’s next season, not only does she have no storyline to reel fans in, the storyline she did have appears to be a figment of her imagination. Porsha’s ex-costars have called her out in the past for making up fake boyfriends, and it looks like she is at it again. Stewart has been bragging to everybody and anybody who will give her the time of day that she is dating NFL player LeSean McCoy (of the Philadelphia Eagles), but on Sunday McCoy stepped out with a reality TV vixen on his arm, and it wasn’t Porsha Stewart.

Love & Hip Hop’s Tahiry Jose posted photos of herself online on Sunday October 5th at the Philadelphia Eagle’s game, rocking Sean McCoy’s jersey number. And, after the game Tahiry and LeSean were spotted out celebrating. So either one of two things are happening, LeSean is cheating on Porsha with Tahiry, or Porsha was never actually dating him.

Interestingly, back in April reports began emerging claiming that Porsha Stewart was leaving Real Housewives of Atlanta to star in Love & Hip Hop, however they were never confirmed and we all forgot about it. But, it is ironic that the same week Porsha was demoted on Real Housewives of Atlanta, her alleged boyfriend was out with a star of Love & Hip Hop. So there is a very good chance that she really is headed to Love & Hip Hop, and that is why she is no longer filming RHOA. Porsha Stewart and Tahiry Jose fighting over an NFL player would definitely make for a good storyline.

Do you think Porsha was really dating LeSean to begin with, or did she make the whole thing up? Who is actually LeSean’s girlfriend, Tahiry or Porsha? Do you think Porsha would make a good addition to the Love & Hip Hop cast? Let us know what you think in the comments below!