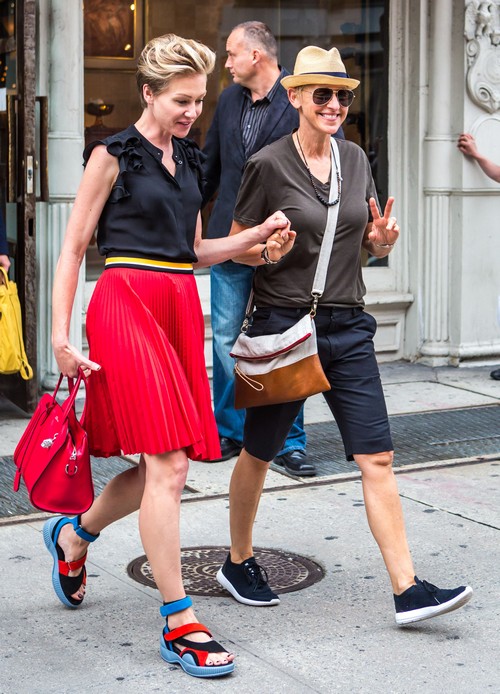 Portia de Rossi is one of those starlets that clues you in to her private life just by her appearance. She battled anorexia and booze for years and those old demons creep back into her current life when things are strained. Since Portia doesn’t work all that often her biggest source of stress comes from her marriage to Ellen DeGeneres and sources close to the couple confirm that things are pretty bad. Many of the problems seem to stem from the fact that Portia allows Ellen to choose her work projects for her. That means that she does precious little while Ellen enjoys an illustrious career.

Ellen is known for making friends with other women and then wining and dining them a bit – supposedly just in the name of friendship but ultimately Portia knows her patterns. She realizes that a multitude of women would kill to be in her position and Ellen likes younger women. They have also been fighting over Portia’s desire to have a baby.

Apparently the couple originally agreed on no kids but as Portia has gotten older she has realized that she actually would like to be a mother. Ellen feels like Portia even saying such a thing is going back on their original agreement and Portia can’t help that in her heart she now wants a baby. The two have literally hit a brick wall and Portia believes that she will ultimately be cut loose.

Since she has no real control over having a baby or even keeping Ellen in the marriage with her she is resorting to controlling what she can – her weight. While Portia has never been a big girl she can look downright sickly when under pressure and recent pics show that she’s shrinking again.

Portia on some level knows that her days as Ellen’s wife are numbered and it’s starting to affect her health again. Not only that but sources have said that Ellen is less likely to pull the plug on the marriage when Portia is in a bad personal space so it could be a way of hanging onto her wife. Do you think that Portia’s health is being affected by her shaky marriage as much as people are saying? Should these two end things or do you think that there’s a chance that Ellen and Portia’s marriage can be saved? Tell us your thoughts in the comments.