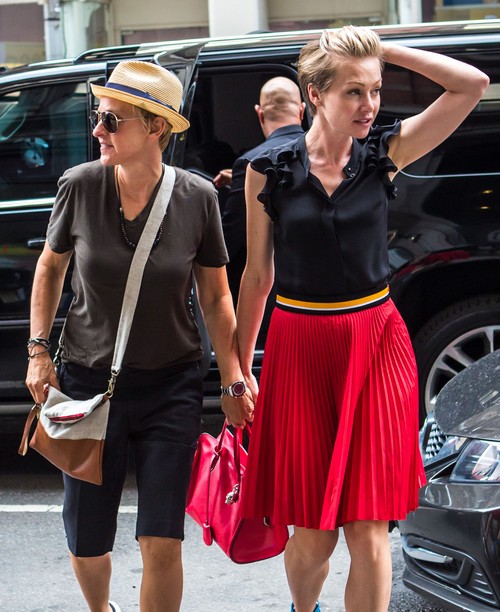 Portia De Rossi’s publicly dealt with some major issues in the past, including her battle with an eating disorder in 2000. However, new reports suggest that she’s currently at her worst health yet, having reportedly received diagnosis for osteoporosis and cirrhosis of the liver in 2001 and those things getting aggravated with her non-stop drinking. No doubt that Ellen DeGeneres is extremely upset that her wife has fallen back into self-destructive behavior.

Apparently, cirrhosis can be triggered by anorexia, with a doctor telling Radar Online, “Anorexia can lead to organ failure in its advanced stages. The kidney, heart and liver are all affected. In its end stages, liver shut down of anorexia nervosa is similar to cirrhosis.”

The doctor says that since cirrhosis is a life-long ailment, avoiding toxins such as amphetamines and alcohol is the best option to staying healthy. Unfortunately, Portia’s abused diet pills in the past, so she’s gotten her fair share of the liver-damaging amphetamines. Plus, she was reportedly admitted to rehab in May for a drinking problem, so she clearly has an issue staying away from booze.

Granted, at least Portia hasn’t reverted back to starving herself? I mean, drinking every day isn’t the solution, but with her personal history of EDs, alcohol is probably the lesser evil. At least with booze, she has a solid shot of making a full recovery and putting everything behind her – if her relationship with Ellen DeGeneres becomes stable again, of course.

Some reports suggested that it was marriage troubles that were driving Portia to drink, and if that’s the case, they’ll have to solve their relationship issues before Portia’s drinking becomes any worse. Not only is her short-term health at risk, but her long-term health is also at risk thanks to the cirrhosis. Hopefully Ellen realizes that, and the two have a long and open dialogue about how best to move on from here.