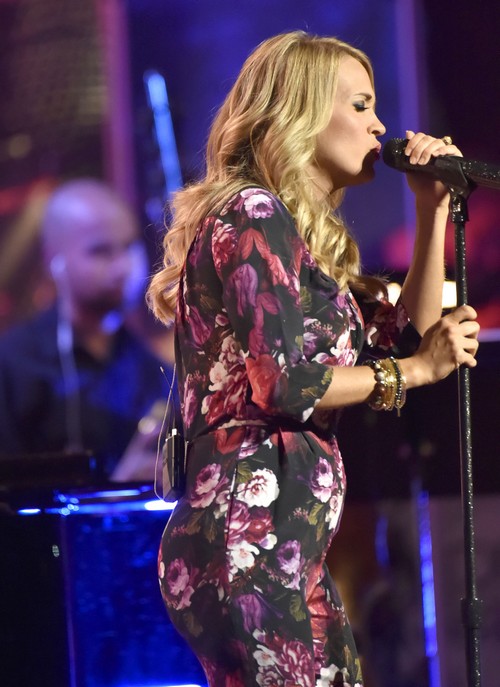 Are country singer Carrie Underwood and her hockey playing hubby Mike Fisher going to break up and divorce before their first child is born? Well, rumor has it that ever since Carrie announced via social media that she is rocking a baby bump and pregnant with their first child, their relationship has gone drastically down hill. Mike and Carrie were easily one of the most solid couples in Hollywood, but according to recent reports there is some trouble in paradise.

The November 3rd edition of Star Magazine claims, “Since news broke that the pro hockey player’s wife Carrie Underwood is pregnant with the couple’s first child, Star can reveal that the dad-to-be isn’t making enough of an effort to alleviate some of her responsibilities. The gorgeous country singer and the Nashville Predators star, who wed in July 2010, have been bickering over Mike not pitching in with household duties.”

Star’s inside source reveals that, “Carrie has always done the cooking, cleaning, and laundry. But, it has been harder for her to keep up since she got pregnant. She gets bouts of morning sickness and is tired a lot of the time. Carrie constantly asks Mike to help out more, but he is oblivious to it. It’s gotten to the point where she is starting to resent him, and the stress isn’t good for the baby.”

While, no one likes a lazy baby-daddy, the odds of Carrie Underwood and Mike Fisher divorcing over the laundry are pretty slim. We’re talking about a Grammy winning singer and a professional athlete, I’m pretty sure they can hire a maid or two to pick up the slack while Carrie is pregnant, before they resort to breaking up. Do you think Mike and Carrie’s marriage is solid? Or do you believe they could get divorced before their baby is even born? Let us know what you think in the comment section below.